Among those responsible for Chandrayaan-2 successful launch, role of three scientists from Assam - J N Goswami, Dipak Kumar Das and Hidam Rajeev Singh, are worth mentioning

The Indian Space Research Organization (ISRO) on Thursday released the first image of the moon captured by Chandrayaan-2.

According to reports, the space agency said the image was taken at a height of about 2,650 km from the lunar surface.

The Apollo crater is located on the southern hemisphere of the moon and Mare Orientale basin is believed to be nearly three billion years old, and shaped like a target ring bull’s-eye, the report added.

ISRO in its official Twitter handle released the image and wrote:

‘Take a look at the first Moon image captured by #Chandrayaan2 #VikramLander taken at a height of about 2650 km from Lunar surface on August 21, 2019.

Mare Orientale basin and Apollo craters are identified in the picture.#ISRO‘ 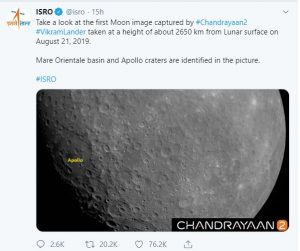 The National Aeronautics and Space Administration said it was one of the most striking largescale lunar features.

The spacecraft is expected to make a soft landing on the moon on September 7.

ISRO chairman K Sivan had said the next major event will happen on September 2, when the lander – called Vikram – will separate from the orbiter and proceed to perform a series of ‘complex braking manoeuvres’ before attempting to soft land in the south polar region of the moon.

Earlier this month, the ISRO released a set of five images of the earth captured by Chandrayaan-2.

If the mission is successful, India will become the fourth country to achieve a soft landing on the moon after the United States, Russia and China.

A successful landing would make Chandrayaan-2 the first lunar probe on the south polar region of the moon.

Among those responsible for Chandrayaan-2 successful launch, role of three scientists from Assam — J N Goswami, Dipak Kumar Das and Hidam Rajeev Singh, are worth mentioning.

Astrophysicist J N Goswami is the chairman of the advisory board for Chandrayaan-2 mission.