AGP, which has tied up with the BJP, has no right to demand withdrawal of Citizenship Bill: Nagma 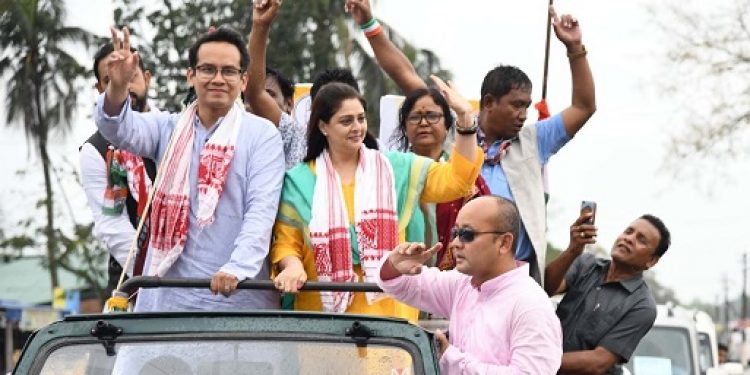 Congress leader and actor Nagma along with Congress' Kaliabor LS candidate Gaurav Gogoi during a roadshow as part of election campaign for the ensuing general election at Bokakhat on Tuesday. Image - UB Photos

Congress’ star campaigner Nagma, who addressed party supporters at an election rally, also participated in a roadshow of party candidate Gogoi, who is the son of former three-time Assam chief minister Tarun Gogoi.

Gaurav Gogoi, who has sought re-election from Kaliabor Lok Sabha seat, is the Congress in-charge for West Bengal and Andaman & Nicobar islands.

While sharing a few images of the election campaign on her Twitter handle Nagma on Tuesday stated: “Addressed a Meet & participated in a Roadshow for Shri Gaurav Gogoiji Cong MP from Assam – Kaliabor. AICC in-charge West Bengal and Andaman & Nicobar islands.”

Coming down heavily on the Bharatiya Janata Party (BJP) which in its election manifesto has announced to get the Citizenship Bill passed if voted to power, Nagama tweeted: “BJP in its Manifesto supports the CAB ( citizenship Amendment Bill) which is against the interest of indigenous Assamese.”

Tuesday was the last day of election campaign for the first phase of Lok Sabha elections to be held on April 11 and  Kaliabor Lok Sabha constituency will also go to polls in first phase.

Nagma, who is a general secretary of the All India Mahila Congress, participated in the election campaign rally taken out from Rongamati at Bokakhat sub-division in  Golaghat district to Kaziranga in the morning.

While delivering her speech during the election campaign rally, Nagma termed Gaurav Gogoi as a ‘capable and young leader’ and said she wants to see him as the chief minister of Assam.

She said the Asom Gana Parishad (AGP), which has tied up with the BJP, has no right to demand withdrawal of the Citizenship (Amendment) Bill.

Addressed a Meet & participated in a Roadshow for shri GauravGogoiji Cong MP frm #Assam #Kaliabor. AICC incharge West Bengal and Andaman & Nicobar islands. #BJP in its Manifesto supports the CAB ( citizenship Amendment Bill) which is against the interest of indegenious Assamese pic.twitter.com/i7hDPqTaLM

Both the BJP and the Congress have added Bollywood firepower to their list of star campaigners for the general election of India. Former Bollywood actress-cum- General Secretary of All India Mahila Congress Nagma Morarji took part in a road show for Kaliabor Congress Candidate Gaurav Gogoi on Tuesday.

Taking part in the road show from Rangamati to Kaziranga Nagma urged the voters to vote for Congress candidate Gaurav Gogoi. Talking to the media, she said that people should vote for Gogoi as he is a dynamic political leader and also eligible for Assam Chief minister portfolio.