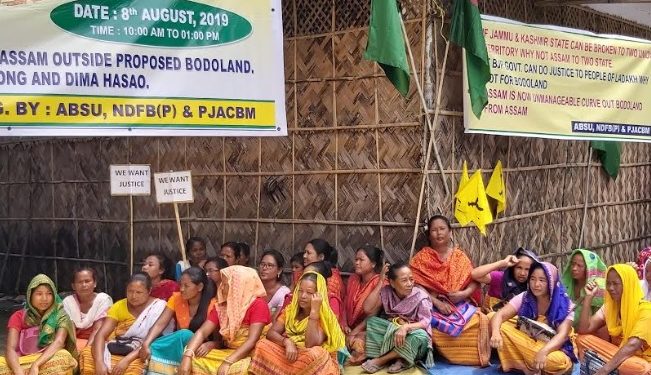 The All Bodo Students Union (ABSU) on Thursday staged a three-hour protest dharna in various parts of proposed Bodoland state demanding creation of separate Bodoland curved out of Assam.

The organizations intensified the Bodoland agitation following the Indian Government’s announcement to abrogate Article 370 and 35A and bifurcate Jammu & Kashmir into two union territories Kashmir and Ladakh.

In Kokrajhar, the ABSU and it’s movement groups carried out the dharna programme at children’s park near deputy commissioner’s office.

Over 5000 people with placards and banners and shouting slogans participated in the agitation from 10 am to 1 pm.

Participating in the programme, ABSU general secretary Lorence Iskary said this is high time BJP government execute the policy of new state creation in the country.

The student leader urged the BJP government to come with the idea of resolving the issues of armed revolutionary by creating separate Bodoland under the provisions of Constitution of India Article 2 and 3.

The dharna was organized in all the district head quarters of proposed Bodoland region.

A memorandum was also sent to Prime minister and Home Minister through the deputy commissioner of every district headquarters.