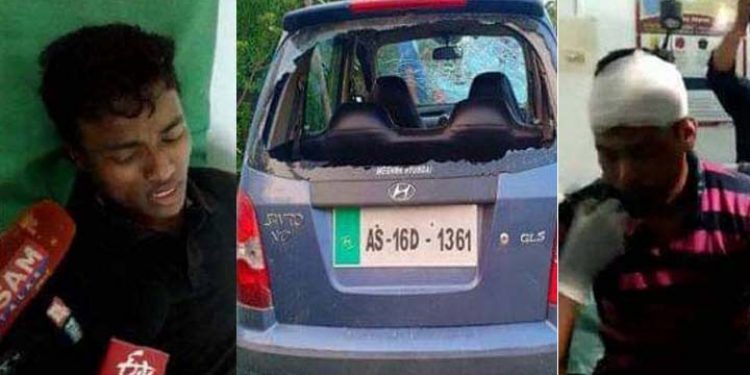 Two of the injured and the damaged vehicle. Image - Northeast Now

In a poll-related violence in Kokrajhar district, three persons were injured at Subashpally in Kokrajhar town on Tuesday evening at around 5 pm.

The Kokrajhar parliamentary constituency went to general elections in third phase on Tuesday.

The injured have been identified as 22-year-old Ratan Basumatary, 29-year-old Dhrubajit Brahma and 23-year-old Kwrwmdao Mushahary.

The injured have been stated to be activists of the All Bodo Students’ Union (ABSU) which has supported the United People’s Party Liberal (UPPL) candidates in the Lok Sabha election.

According to sources, the ABSU workers were moving towards a polling station so that no rigging takes place but they were chased and later beaten up by some miscreants, allegedly supporters of the Bodoland People’s Party (BPF).

According to allegation, the trio was attacked with lathis.

The miscreants also damaged the vehicle where the trio was travelling.

An FIR has been lodged in this connection.

Various organizations including the All Bodo Students’ Union (ABSU) have condemned the incident and demanded that strong action be taken against those involved in the crime.

Police have already started investigation into the matter.

Immediately after the incident, all the three injured were admitted to the hospital.