Closing ceremony was followed by a Bengali play ‘Shuka’, written and directed by Tamojit Roy 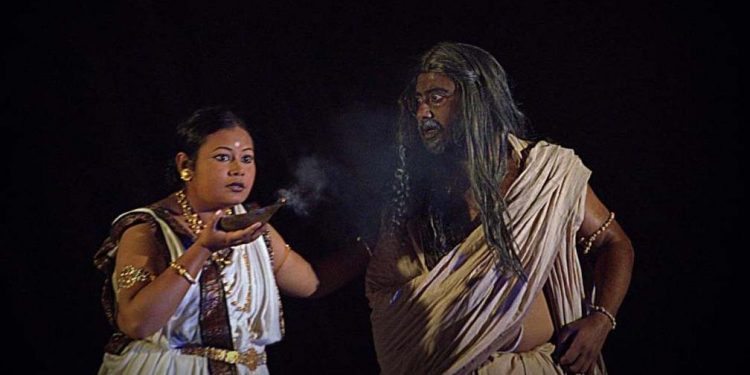 A still from the Bengali play ‘Shuka’, written and directed by Tamojit Roy. Image - Northeast Now

The Bharat Rang Mahotsav was organized by National School of Drama (NSD) in collaboration with India Club Theatrical Institution.

The week-long drama festival witnessed huge crowd every day and the audience was enthralled with the stage performances.

Chief coordinator of Bharat Rang Mahotsav, Ashim Kumar Sharma said, “Every day, seven hundred to eight hundred people from all over Upper Assam came here to see dramas. The people have shown their exuberance which is commendable and we are fortunate to have a very good disciplined crowd in Dibrugarh. We appeal to NSD to organise more drama festivals at Dibrugarh in near future.”

The closing ceremony was followed by a Bengali play ‘Shuka’, written and directed by Tamojit Roy.

The story line of the play set in the evening before the great war of Kurukshetra in Mahabharata.

The place of occurrence is Badrikashrama, where Vyasa, along with his son Shuka and four other disciples, is engaged in teaching the Vedas and Upanishads.

“I have enjoyed all the plays and want to see more dramas in coming years in Dibrugarh. I appeal to the National School of Drama to organise drama festival in Dibrugarh every year. The seven-day Bharat Rang Mahotsav gave us lots of opportunity to witness international dramas in Dibrugarh,” said Ajay Dutta, a resident of Dibrugarh.

The festival also included a ‘Living Legend’ session by Ratan Thiyam and a ‘Master Class’ session by Bharat Sharma.

The festival in Dibrugarh was inaugurated on February 4, 2019.