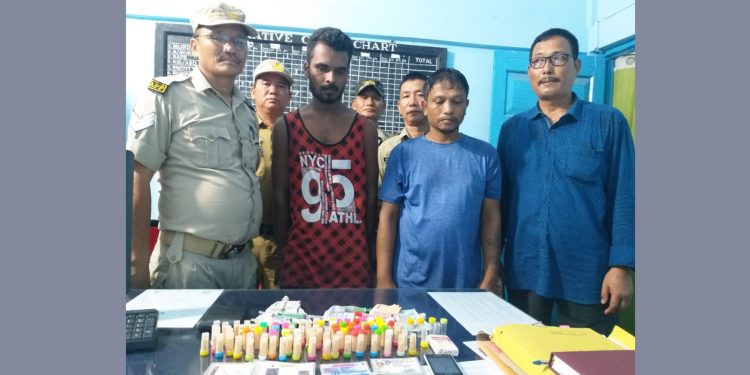 The arrested drug peddlers along with the seized drugs. Image credit - Northeast Now

The Capital police recently busted two drug rackets and arrested 5 peddlers for being involved in the rackets.

The arrested drug peddlers have been identified as Moon Das and Gautam Das.

The police also recovered large quantities of banned substances from their possession.

Moon is a resident of Birkuchi in Kamrup (M) district of Assam while Gautam hails from Dharampur, in Morigoan district, police said.

Besides the banned substances, other items like cash and mobile phones were also recovered from their possession.

A case under the Narcotic Drugs and Psychotropic Substances Act has been registered against the duo.

In another similar case, the police, after receiving information from sources that some drug peddlers were transporting narcotic substances in an SUV for its further distribution at Itanagar alerted the naka at the Banderdewa check gate.

The police were able to arrest one Ligam Sora and Budak Ramching on the same day.

A hefty amount of suspected contraband drugs and other items were recovered from the duo following which the vehicle was seized.

A case was registered at the Banderdewa Police Station.

Ligam and Budak, on being interrogated, had revealed that they purchased the drugs from one Rajiv Doley of Banderdewa in Assam and after rigorous efforts the main drug supplier was trapped.

A total of 10 sachets of brown sugar were also seized from Rajiv‘s possession.

All the arrests were made under the supervision of Capital Superintendent of Police Tumme Amo and Naharlagun SDPO R Kamsi.

SP Amo said many such raids are in progress to bust the entire supply chain.