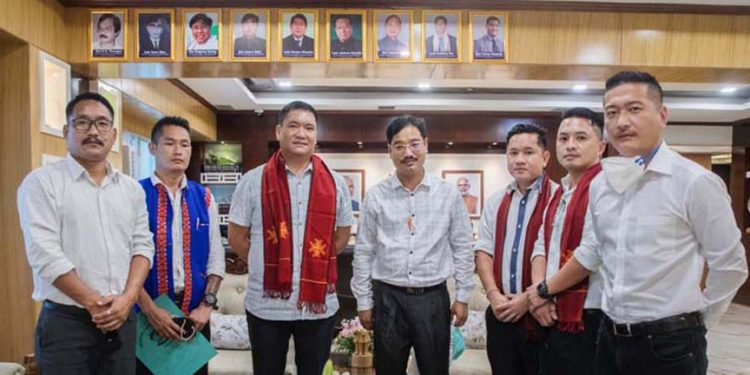 A delegation of the youth wing of Adi Baane Kebang, an apex body of Adi tribe, met Arunachal Pradesh chief minister Pema Khandu on Monday and requested him to upgrade the de-addiction centre at Pasighat.

The delegation of executive members of the youth wing of Adi Baane Kebang was led by its president Joluk Minung.

The delegation urged the Arunachal Pradesh chief minister to sanction funds for increasing the seat capacity of the de-addiction/rehab centre at Pasighat from 10-bed to 50-bed and upgrade the judicial jail.

It said the judicial jail at Pasighat is not sufficient enough to lodge more arrested criminals, drug abuse cases as all the cells are locked with excess numbers of UTPs and said only upgradation of the jail would help in lodging more UTPs.

The introduction of Pasighat Traffic Warden at the lines of Itanagar Traffic Warden would lessen the burden of traffic issues in  Pasighat, the ABKYW told Khandu.

Chief minister Khandu said all the proposals made by the youth wing of Adi Baane Kebang have been acknowledged seriously and will be discussed in the next Assembly session.

He also said necessary action on issues highlighted in the memorandum has already been taken up by the concerned department.

The de-addiction centre at Pasighat is said to be the best functioning rehab centre of the state for drug abuse victims which needs funds for increasing the bed capacity and construct staff quarters, guard room and yoga centre.

Dr. Oson Borang, nodal officer of the rehab centre, said the wait list for enrolling into the centre as of today is around 80 whereas only 10 youths can be accommodated at present.

“The grant of funds as submitted by a team of Women Against Social Evils (WASE) during the CM’s April 3 visit to Pasighat, if sanctioned, would be helpful for the management of drug rehab centre,” said Dr. Borang, who is managing the centre.