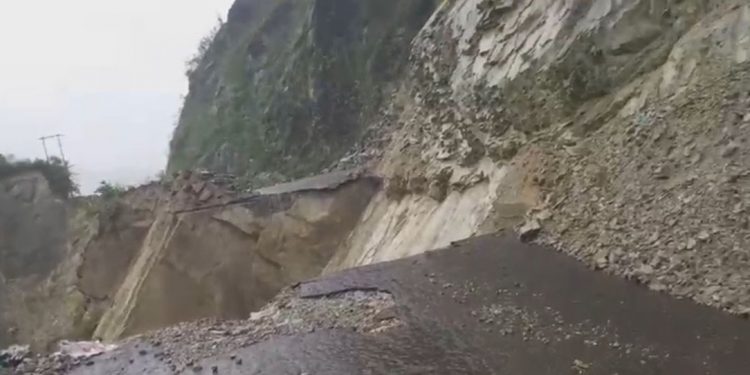 The Pasighat-Pangin Trans-Arunachal highway was breached near Rottung village at Kebang in East Siang district of Arunachal Pradesh on Sunday after a portion of the road slid off to the deep gorge below.

Incessant rains for the past few days have been the cause behind it.

Some 36.6 km of the road passing through Pangin-Boleng and other villages in the district got completely disconnected from Pasighat.

Following the breach of the road, the Adi Baane Kebang Youth Wing (ABKYW) urged the authorities concerned to restore the damaged portion of the road as early as possible.

ABKYW, President, Joluk Minung said that this road is the lifeline of people of East Siang district and its early restoration is the need of the hour.

“I have appealed to the highway department to at least arrange an alternative footpath so that people in an emergency can travel through the road”, said Minung.

Meanwhile, when contacted, executive engineer Er. Dabe Perme informed that the damaged portion of the road measuring 30 metres will require a minimum of 15 days to restore provided road machinery for construction is available.

“The work for construction of an alternative emergency connectivity footpath will begin from Monday,” Perme said.

“Various contractors are being approached to repair it,” Perme further said.

However, the incessant rain in the region is likely to damage roads in the area as landslides are common in these stretches of the roads due to loose formation of base soil and gravel in the outer Himalayan mountainous region.