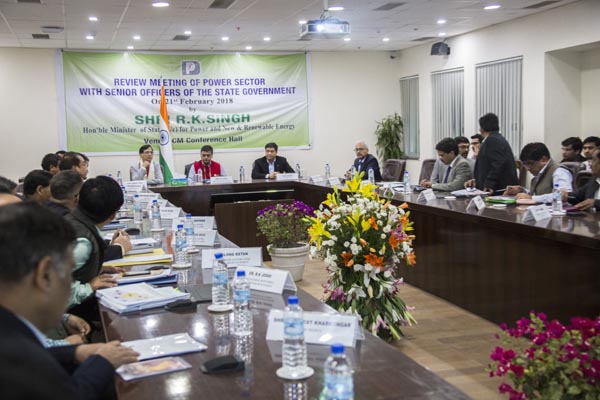 Union Minister of State for power and New and Renewable Energy, Raj Kumar Singh on Thursday directed the officials to expedite the work to electrify every village in Arunachal Pradesh by 1st May 2018. He said at least 10 percent of houses in each village must be electrified within the deadline.

Singh announced a special package of Rs 925 crores for strengthening of power transmission and distribution system in the state. This fund will be used for re-conducting old 11 KV lines and conversion of selected long LT distribution lines with 11 KV High Voltage Distribution System (HVDS).

He appealed the department to focus on cutting down losses and advised the fund sanctioned to be used primarily for the said purpose.

Informing that centre has assured 24×7 power for all by April 1 2019, the Union Minister urged to move away from regime of ‘load shedding’ to regime of ‘No Load Shedding’. He said it is necessary for the country to reach the level of ‘no load shedding’, which is the sign of a developed nation.

Expressing concern over slow execution of work in rural electrification by the contracting agencies, the Chief Minister informed on the decision of the state government to depute APEDA under the supervision of the Deputy Commissioners to execute all the remaining electrification works relegating the contractors to supply of equipment.

He said Arunachal remains a big ‘stumbling block’ in achieving Prime Minister’s goal for electrifying every village by May 2018. Of the 900 un-electrified villages across the country, about 600 villages are in Arunachal, he added.