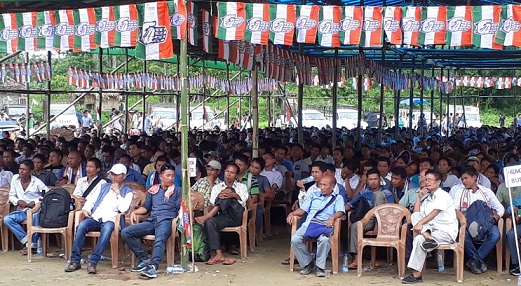 More than 5,000 people including youth leaders, gaonburas and community leaders of Miao constituency, many of whom walked for five days, joined the Congress at Kharsang on Saturday. The joining under the leadership of local leader Chatu Longri was organised by the Changlang DCC.

At the rally, the people of the constituency expressed their anger at BJP, blaming it for religious conflicts and dividing the people on the basis of food, culture, faith and community. They also said the Pema Khandu-led government has damaged the self-sustaining and self-sufficiency systems by ignoring development of basic utilities such as proper channelling of water courses, forcing many to abandon age-old tradition of paddy cultivation and work as daily wagers in tea gardens.

The aggrieved leaders also slammed the state government for curtailing infrastructure development, rise in land revenues, decreased employment opportunity and exploitation of resources such as coal, oil and forest in the area.

The youth were particularly angry with the lack of employment and entrepreneurship opportunities.

APCC President Takam Sanjoy, addressing the rally, highlighted the contribution of the Congress to the development of Arunachal Pradesh.

He said Kharsang and Miao are the richest constituencies in Arunachal Pradesh but its people have been forced to be poor. “The people of Kharsang have the right to compensation for TAH and natural resources exploited from this area. Non-payment of compensation is total violation of rights. The people must revolt against the current government,” he said.

The BJP, he said, has manipulated the amount sanctioned by NEC for the development of Arunachal Pradesh, with the Modi government withdrawing transport and other subsidies from the state.

“The BJP has proved to be anti-tribal,” Sanjoy said, echoing party President Rahul Gandhi’s call not to fear while resisting the bad polices of the government.

He urged the women, ex-servicemen and youths to be part of the party for a better tomorrow, and expressed confidence that Congress will return to power in 2019 to usher in the change the people want.

APCC vice president Marina Kenglang and state convenor of RGPRS Joram Jaya also criticised the BJP for playing the ‘gender inequality’ card and ignoring the rights of women in every sphere. They also demanded holding panchayat elections at the earliest.