Following a recent event, Kailash Kher launched a platform called Nayii Udaan for ‘new and raw talent’ on the occasion of his birthday on July 7.

The union sports minister and Joshi fall into Mohapatra’s criticism for felicitating Kher.

In her first tweet to the series, Mohapatra wrote, “Sir, we met last year when you conferred the youth icon award for music hosted by a news channel. I applaud your initiative to start the induction of our gender & thus provide us with equal opportunities, a right enshrined in our beloved constitution.” 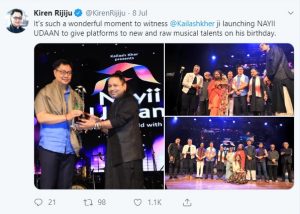 The sports minister shared the pictures of the event on Twitter expressing his joy “It’s such a wonderful moment to witness @Kailashkher ji launching NAYII UDAAN to give platforms to new and raw musical talents on his birthday.”

“Sir, I ask if you are aware of the multiple narratives of molestation, improper sexual conduct & shares of women, (some minors, some journos) in the @IndiaMeToo movement against Kailash. Not 1 or 2 but over 10 women from across board shared their trauma. Matters? @prasoonjoshi?,” Mohapatra questioned Rijiju and Prasoon Joshi.

Further, she lambasted on Bollywood Actor Salman Khan’s charitable endeavour Being Human questioning, “Is this PR ‘virtue signalling’ the new way to wash out all our misdemeanours & walk away?” recalling Kher she labelled them as  ‘serial predator’.

In the previous year, the #metoo movement was on its peak with many women including Mohapatra herself accused Kailash Kher of behaving inappropriately with women on multiple occasions.

Coming forward she stated Kailash was a serial offender for years.