The entire Northeast is burning because of this Citizenship (Amendment) Bill: AAPSU 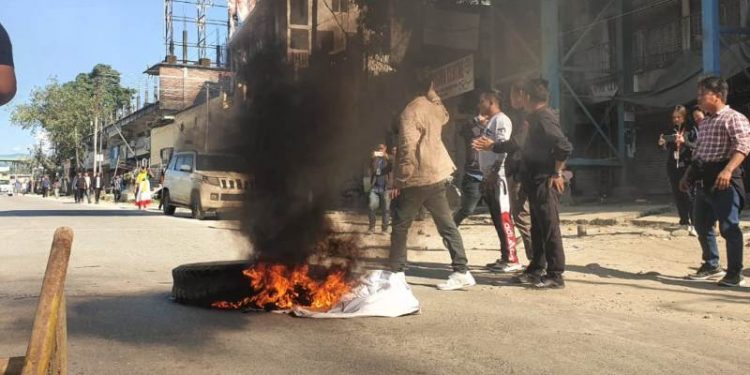 Barring a few stray incidents, the bandh remained by and large peaceful in the state.

The shutdown was supported by the All Arunachal Pradesh Students’ Union (AAPSU), a component of NESO and various other district based student organizations.

“Though there were reports of protesters burning tyres and creating blockades on the national highway at Itanagar and Naharlagun, there was no damage to life or property. Normal life has resumed following the lifting of the shutdown at 4 pm,” a statement from Capital AP Tumme Amo said.

Earlier, while speaking to Northeast Now, AAPSU general secretary Tobom Dai said, “Though the CAB has been introduced in the Lok Sabha and could also eventually pass on Wednesday, the AASPU being a constituent of NESO and the people of Arunachal and Northeast would always stand against it.”

The Bill seeks to grant citizenship to those who had been forced to seek shelter in India because of religious persecution.

“There are many underlying issues regarding the Bill which can have ramifications in regards to the peace and security of the indigenous people of northeast,” he said.

Dai said that “even though Bengal Eastern Frontier Regulation, 1873 (BEFR) and Chin Hills Regulation, 1896 (CHR) have been protecting Arunachal for many decades, the people here would feel safer only once it is framed into an Act.”

The AAPSU general secretary while referring to the statement of chief minister Pema Khandu further said that it was too early for the state government to welcome the contentious Bill with open arms.

Khandu had on Tuesday took to social media to thank Prime Minister Narendra Modi and home minister Amit Shah for exempting Arunachal from the purview of the CAB.

“The entire Northeast is burning because of this Citizenship (Amendment) Bill and on the other hand the Central government is making all out effort pass it and divide us in its name. This is very condemnable,” Dai said.

The BJP has majority in the parliament, but we will not stop fighting against it, he added.

Echoing Dai, AAPSU president Hawa Bagang said, “Besides making the concerns and voices of Arunachal heard, the union was also supporting the bandh for the people of Assam.”

“The people of Assam are our brothers and sisters and their problem is ours too. We will fight tooth and nail to support them and continue doing so till the time the Bill is not revoked,” Bagang said.

NESO coordinator Pritam Bhai Sonam said the Centre was yet witness the real protest and Tuesday’s bandh was only its trailer.

“The NESO has been opposing the Bill since its inception and will continue to do so till the time it is not put to an end. We had also made out stand clear regarding the Bill in front of Home Minister Shah during our recent meeting in Delhi and the Centre still went ahead with its introduction,” Sonam said.

Sonam also said that the people of the state would only be safe once the BEFR and CHR were turned into Acts.

“The Central and more importantly the state governments should stop pretending that Arunachal and its people are safe under the regulations,” he said.

Loda said the government should clearly understand that the Northeast is not a dumping ground for the refugees and they would not let that happen as well.

“If u want to accommodate the refugees you are free do that in other states but not in Arunachal and Northeast,” Loda said.

The streets of Pasighat, the headquarters of East Siang district wore a deserted look as shops and offices remained closed.

SP Rajiv Ranjan Singh said adequate forces were deployed at all vulnerable places followed by constant police patrolling and no untoward incident was reported from any corner of the district.

“Cultural troupes from Rajasthan, Odisha and Nagaland who is here to participate in ‘Discover North East Yatra’ reached Pasighat safely with the help of police escort via the Ruksin check gate,” Singh said.

A similar report from Aalo in West Siang district said most of the government offices functioned as usual on the day; however, markets and other private institutions remain closed.