The on-going indefinite protest at North Eastern Regional Institute of Science and Technology (NERIST) at Nirjuli in Arunachal Pradesh demanding a regular director entered its sixth day on Sunday.

The protesting students took out a silent procession on Saturday under the aegis of the Students’ Union of NERIST (SUN).

The silent protest march which started from the NERIST main gate to Bage Tinali at Nirjuli, was joined by thousands of students wearing black attires marked with the #SaveNERIST slogan and their mouths gagged with black tapes. 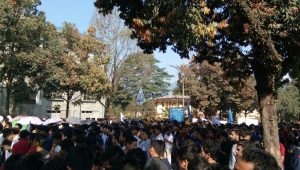 Academic activities in the premier technical institute of the region had come to a standstill after the students launched an indefinite strike from February 27 last, demanding immediate appointment of a permanent director by the Ministry of Human Resources Development.

Meanwhile, four among the eight students on fast unto death, Kipa Tacha, Rupam Khagaria, Rakesh Roy and Karli Lollen had to be hospitalized on Saturday after their conditions started to deteriorate.

However, the other four, Rakesh Roy, Dikkar Taji, Ige Riram and Yash Kumar are still continuing with the indefinite hunger strike, which was later joined by eight more students who volunteered themselves in the relay-hunger strike.

The SUN has decided to continue with the peaceful protest till Tuesday as Education Minister Honchun Ngandam assured them that their demands will be met by Monday.

The SUN, however, threatened that if their demand is not met by Monday as assured, it will be forced to intensify its agitation by blocking the national highway.

Meanwhile, the AAPSU has decided to enforce closing down of all higher educational institutions across the state on Monday as its first phase of agitation, if the demand of NERIST is addressed.

A decision to this effect was taken at a central executive meeting held at its central office in NEFA Club of Itanagar on Saturday.