The Centre promulgated an ordinance on Thursday to merge the Jammu and Kashmir (J&K) cadre of all India services officers such as IAS, IPS and IFS with the Arunachal Pradesh, Goa, Mizoram Union Territory (AGMUT) cadre.

As the Winter Session of the Parliament was cancelled, the ordinance, issued by the Union law and justice ministry, has been signed by President Ram Nath Kovind amending the J&K Reorganisation Act, 2019 that bifurcated the former state into two Union territories as J&K and Ladakh.

The ordinance, Jammu and Kashmir Reorganisation (Amendment) Ordinance, 2021, was promulgated on Thursday by President Kovind.

The ordinance has been promulgated to amend the “Jammu and Kashmir Reorganisation Act 2019”.
According to a gazette notification, the ordinance “shall come into force at once”.

In section 13 of the Jammu and Kashmir Reorganisation Act, 2019, after the words, the figures and letter “in article 239A”, the words “or any other article containing reference to elected members of the Legislative Assembly of the State” shall be inserted, the ordinance said. 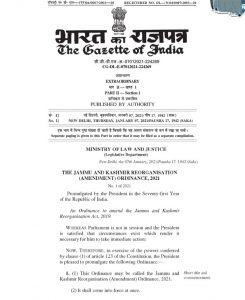 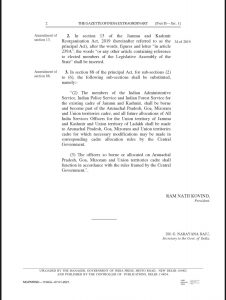 The officers so borne or allocated on Arunachal Pradesh, Goa, Mizoram and Union territories cadre shall function in accordance with the rules framed by the Central Government.

According to amedia report, there are around 4 lakh government employees in the undivided Jammu & Kashmir.

Of the 58 IAS and 66 IPS officers, 9 and 16 are on central deputation or suspension respectively.

The sanctioned strength of IAS and IPS officers in J&K is 137 and 147 respectively.