Itanagar: Be prepared for emergencies in monsoon, officials told 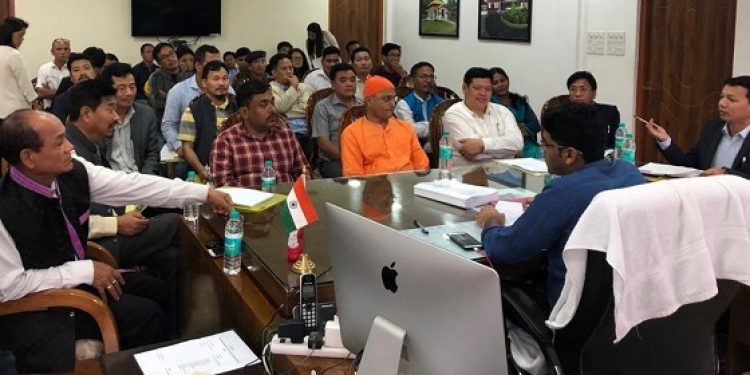 View of a meeting on preparedness for upcoming monsoon. Image - Northeast Now

Amidst the ongoing spell of pre-monsoon showers, Itanagar Capital Complex deputy commissioner Himanshu Gupta on Wednesday chaired a meeting on monsoon preparedness at his office chamber.

The DC, who is also the chairman of district disaster management authority, urged all departments to prepare an advance action plan in order to tackle any disaster during the upcoming monsoon season.

He directed all the line departments to further review and submit their disaster management plans as soon as possible.

Gupta emphasised the need for greater coordination and co-operation from various stakeholders in order to tackle disasters collectively. He urged the EACs of Itanagar and Naharlagun and CO Banderdewa to identify vulnerable areas prone to disaster.

He also directed the EE (PWD) to inspect choked drains and immediately carry out repair and maintenance and also to take necessary measures to avoid any spillover during monsoon.

The DC asked the departments such as PWD, PHED, Electrical, WRD and BSNL to work in coordination with each other so as to avoid any inconvenience to the public and also to be prepared to tackle any kind of disaster.

He also directed the DMO, M. Perme to carry out publicity regarding various dos and don’ts during monsoon which may cause serious health hazards.

Gupta also reviewed the status of the proposal for the bridge connecting the helipad area to Borum and the ongoing project of Division IV bridge, which once completed would help reduce traffic congestion to a large extent.

The representatives from TK Engineering and Consortium Private Limited were directed to speed up the work along and immediately remove muck from the highway.

Vital suggestions and preventive measures for the upcoming monsoon were shared and deliberated upon by the members present.

“Natural disasters are unpredictable and inevitable and therefore proper measures and good practices should be adopted in combating the disaster and future calamities,” Gupta said.

Capital Complex SP Tumme Amo pointed out a few locations that need immediate attention and where there have been instances of disasters earlier.

Various other issues such as preparation of department-wise monsoon preparedness, roles and responsibilities of departments concerned were also discussed.

Earlier, EAC Choiki Dondup welcomed the officials while DDMO Moromi Dodum Sonam briefed about the objective of the meeting.

ADC ICC Talom Dupak along with all the stakeholders attended the meeting.