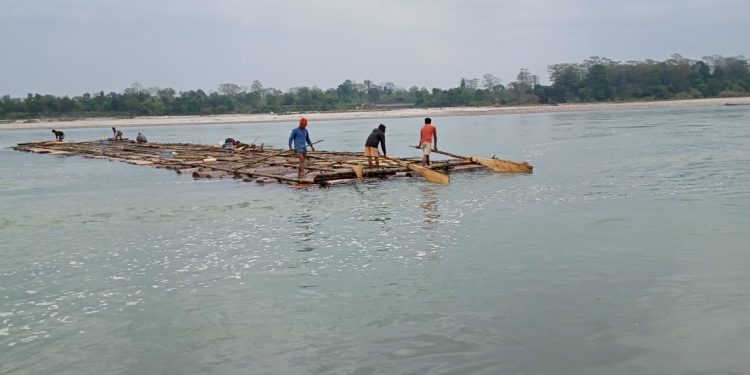 This came a big blow to the illegal timber log smuggling in East Siang district of Arunachal Pradesh.

Acting on the information of illegal timber log raft passing near the Seram Beat of Mebo RF under Pasighat Forest Division, the divisional forest officer (Territory) directed the officials and staffs of Seram Beat to intercept and cease the illegal logs.

However, with the absence of motor boat to chase the rafted logs along the current of Siang river by the territorial division, divisional forest officer of D Ering Wildlife Sanctuary (DEWS) was informed of the incident and accordingly the Sibiyamukh Range of DEWS was activated which could chase the illegal rafted logs by speed boat and the logs were intercepted and damaged jointly by forest and wildlife staffs.

As per sources from the Seram Forest Beat under Mebo RF, the source of the timber logs are said to be from Sigar and Raling areas under Mebo Sub-Division.

The Seram Beat Office i/c L Perme informed that they had visited the said locations recently but no illegal logs were found then.

However, a villager was said to be having confessed of selling some of his trees from unclassified forest areas to a person on the grounds of financial requirements.

The intercepted and damaged illegal timbers logs were said to be from that areas and the department has now started strong measures to check such illegal timber business in the region.

It is worth mentioning here that, the illegal timber logs were damaged in recent past also, but due to absence of infrastructures like transporting vehicle to collect the ceased logs the department is helpless and only damaged the seized logs by damaging it.

However, the department of Forest, Pasighat Forest division has also clarified that the recent incident of Seram village people complaining of illegal timber logging under Seram forest beat areas was due to ownership claim conflict between people of Seram and Namsing village as the trees were under unclassified forest areas and needed to be cleared for agriculture purposes.

Taking serious note of the repeated incidents illegal timber logging in the areas, the management of DEWS has instructed its all three ranges to keep vigil and alert on illegal timber rafting movement along Siang River.

The divisional forest officer of DEWS has also assured to take stringent action against illegal timber logging from drift wood along Siang River as some timber mafias are said to be in connivance with the Forest and Wildlife staffs.

Because without their connivance no illegal timber logging and rafting would take place in the broad daylight, remarked the DFO.

It is worth referring here that, illegal timber mafias from Arunachal Pradesh transports timber log in raft via Siang River to some of timber hubs like Dibrugarh in Assam which is also causing loss of revenue to the state government.