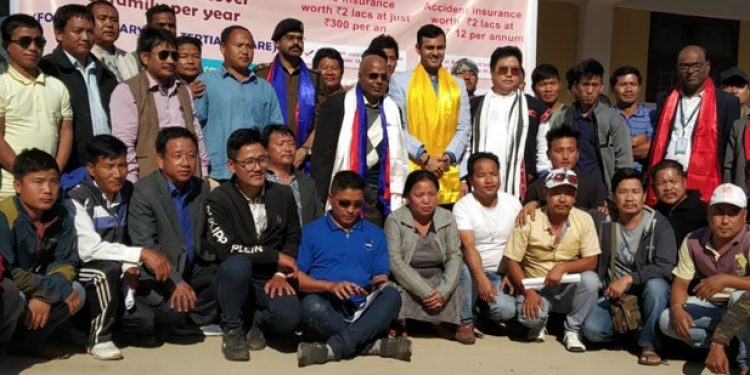 The Chief Secretary exhorted all the members to enrol themselves and encourage others to enrol in the pro-people schemes. Pradhan Mantri Suraksha Bima Yojana is available to people between 18 and 70 years of age with bank accounts. It has an annual premium of Rs 12 exclusive of taxes.

In case of accidental death or full disability, the payment to the nominee will be Rs 2 lakh and in case of partial permanent disability Rs 1 lakh.

Pradhan Mantri Jeevan Jyoti Bima Yojana is available to people between 18 and 50 years of age with bank accounts. It has an annual premium of Rs 330. In case of death due to any cause, the payment to the nominee will be Rs 2 lakh.

Chief Minister’s Aarogya Arunachal Yojana is a State health insurance scheme with coverage of up to Rs 5 lakh for secondary and tertiary care.

The camp was organised by the Capital Complex district administration in association with All Arunachal Pradesh Public Transport Federation (AAPPTF) and State Bank of India.

Capital Complex DC Prince Dhawan requested the members present as well as the transport federation to disseminate the schemes to the remote areas. “With meagre premiums, these insurance schemes can be of extreme help in cases of untoward incidents and hospitalisation,” he said.

He further said that the camp will continue for two more days in Itanagar and a separate camp for Naharlagun would be organised in the first week of January. He appealed to people beyond the transport federation members to enrol themselves for these schemes at these camps.

AAPPTF President Dobin Sonam thanked the CS and the district administration for bringing the benefits of government schemes to the needy sections. He pledged to ensure maximum enrolment of members of the transport federation.