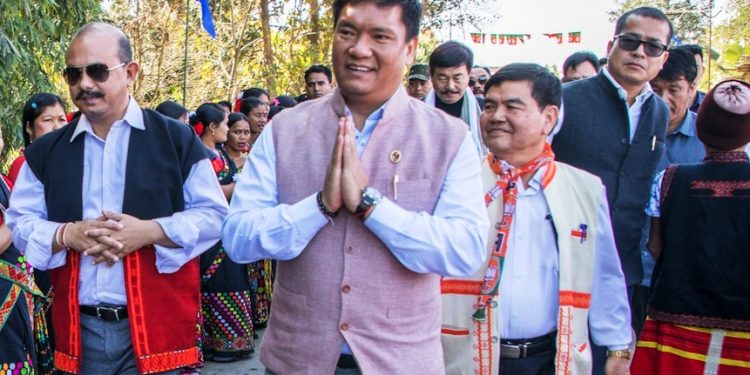 CM Khandu during the meeting at Ngopok village.

Arunachal Pradesh chief minister Pema Khandu on Saturday alleged when the Congress party was in power in the centre, it treated the Northeast as money minting machine.

“When they know nothing about us, how can they provide solutions on poverty and backwardness in the Northeast,” Khandu said while addressing a party meeting at Ngopok village in East Siang district.

The chief minister said unlike other parties, BJP is a party that cares and accordingly development has speeded up in the northeast and all pending issues such as that of Bru and Bodo have been resolved.

“BJP as a party never indulges in petty politics when it comes to welfare and development of its people. BJP is party with a difference and always follows the spirit of Sabka Saath, Sabka Vikas,” Khandu said.

The chief minister said it was the BJP under the leadership of Atal Behari Vajpayee when the DoNER Ministry was formed.

BJP is a party that always tries to be in sync with the aspirations of Northeastern people, he said.

The chief minister on the occasion assured that state government is seriously putting efforts to put the system on right track.

Khandu said for the mechanism of deliverance to be effective, the entire bureaucratic machinery and government employees must work towards achieving it and the politicians alone cannot achieve it.

Till today many of the beneficiaries are unable to reap the full benefits of important state and central flagships programmes, he said.

The chief minister said in coming days the Sarkar Aapke Dwar (government at your doorstep) camps will be carried out with a renewed vigour.

For transparency, Khandu assured to strengthen the third party monitoring by the BJP.

He said the party will keep track and monitor the effectiveness in implementation of government schemes and developmental works.