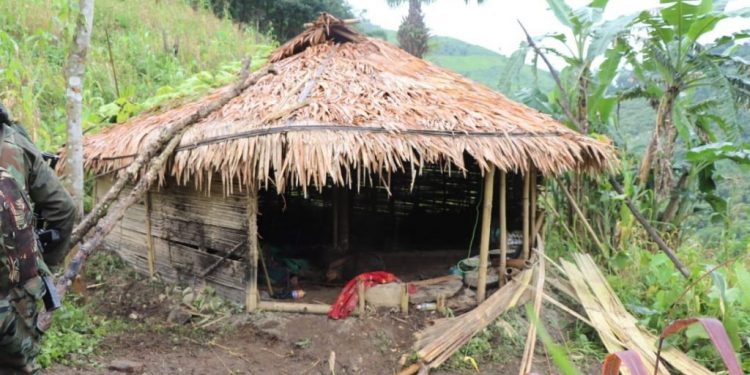 According to specific intelligence inputs regarding the presence of armed insurgents, two columns were launched by the Assam Rifles in general area of Khonsa in Longding district of the State.

The area where the operation was launched is approximately 50 km east of Tinsukia in Assam.

At approximately 4:30 am on Saturday, an operational contact was established with the NSCN-IM) insurgents in the general area.

One Assam Rifles soldier was injured in the cross-fire.

The Assam Rifles trooper is stated to be stable and is being evacuated to the nearest military hospital.

Huge cache of arms and ammunition were also recovered.

Notably, input was received which was verified by different agencies, that a team led by S S capt Somnyam Tangkhul, and five other cadres were camping in the general area of Ninu and they were planning to abduct market president and secretary, Longding.

Accordingly, the joint operation was launched by 6 Assam Rifles and Longding Police and multiple teams were moved.

On Saturday morning at about 4:30 am, the first contact was made by a team of 6 Assam Rifles in jungles between Ninu and Ngissa.

Later remaining teams also moved in formation and firefight continued for about one and half hours to two hours.

CO 6 Assam Rifles and Superintendent of Police, Longding were also present on the spot.

After all the threats were neutralized the area was cordoned and the forensic team was summoned.

Further investigation is in progress.

On July 4 last, troops of Assam Rifles in an operation apprehended five active cadres of NSCN-IM near Tseminyu in Kohima