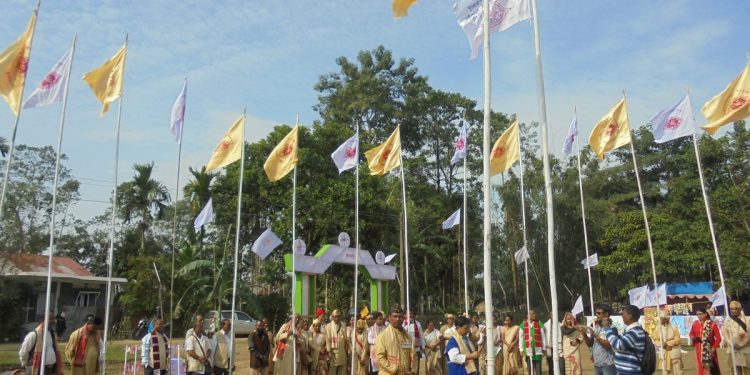 Asom Diwas at Dhemaji organized by district unit of All Assam Ahom Sabha in association of coordination committee of different tribes of Assam and neighbouring Arunachal Pradesh was a maiden attempt for revitalization of loss glory of unity among ethnic diversity ‘greater Assam’.

The Diwas with six-day extensive programme is being celebrated to commemorate the advent of Chaolung Siu-Ka-Pha, the first king of the Ahom kingdom in Assam after his journey over the Patkai Hills.

Notably, mere Ahom community of Assam had been observing the Divas, but this the Ahom Sabha finally taken up joint effort involving members of different ethnic communities of the north-eastern states.

He urged the people of the region to follow the ideals of Siu-Ka-Pha to build a stronger Assam, which was fragmented to different north-eastern states during subsequent period.

Hoisting the Asom Divash flag on the second day, Silapathar Ahom Sabha President Atul Borgohain recalled that Chaolung Siu-Ka-Pha ruled Greater Assam, while there was no division of states.

He observed that present context of inclement situation in Assam is has influenced them to take up the efforts in order to revitalize the unity among different ethnic groups emulating Siu-Ka-Pha’s ideology.

“We are realizing the fact that the ethnic tribes and other groups of the region are people of ancient Assam and our fellowmen,” he added.

“Our efforts aim at rejuvenation of the historic relation and unity among the ethnic groups of the northeastern states,” he also said.

Speaking on the occasion, a Galo community leader from Arunachal Pradesh, Gumke Riba said majority tribes of their State were unaware about the historic relation with Assam.

“We have come to known that Assamese people are our fellowmen so that we should have a cordial relation and elderly treatment towards them,” Riba, who is president of organizing committee of the event, said.

Another speaker Paniram Panyan from Ruksin in Arunachal Pradesh sharing his view over Assam-Arunachal relationship, said their ancestral relation should be preserved for ever.

The organizers and participants paid floral tribute to portraits of gallantry leaders and heroes of the Assamese community on the occasion.