Gibi Tato and Minli Tato- a couple from Arunachal Pradesh- has donated 22,000 square metres of land for the establishment of a model village in West Siang district.

The duo donated their land that falls below the BRTF Road between Kerang and Keak villages near Aalo, the headquarters of West Siang.

The village is to be named ‘Minli-Gibi’ or ‘MG Village’ after the couple.

Gibi and Minli’s effort of three years to turn the place into a model village has also yielded results in the form of road connectivity, children’s park, playground and the construction of nine uniform dwelling houses in the donated land.

Speaking to Northeast Now, Minli said, “In the village, a drainage system, rearing of livestock away from the dwelling places, granary at a planned location, improvised toilets and electrification are being worked out from various sources.”

“However, many things remain to be done despite the village having been notified,” he added.

“The jungle land above the roadside which belongs to us will also be spared for the villagers for the construction of a prayer centre and mitigate forest material needs of the people,” he further said.

“The village will formally be inaugurated at an appropriate time after fulfilling all the basic needs,” he added.

The couple, along with the village committee observed the third Foundation Day of the MG Village as a part of Seva Saptah with a wide range of programmes on September 23. 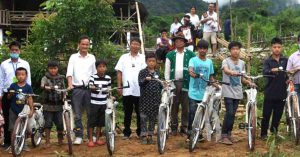 Around nine students of the village were given notebooks, pen, and pencils and a bicycle each to help them go to schools.

Saplings of ornamental trees were also planted from the roadside till the village on the occasion.

Why the future of Asom Gana Parishad seems bleak