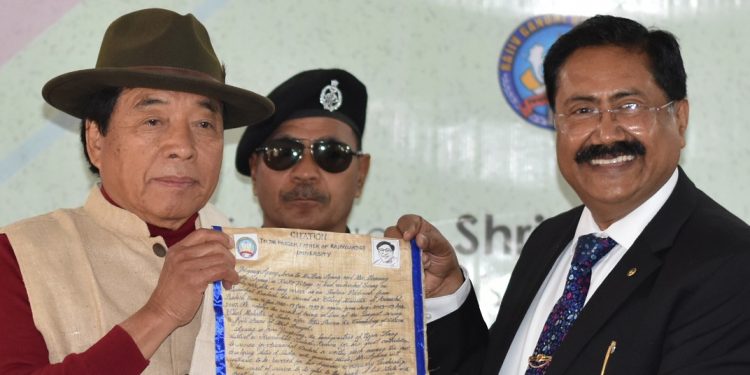 Addressing a large gathering, Apang, who was instrumental in establishing the university in its present location at Rono Hills, shared his experiences and recalled the circumstances leading to the establishment of the varsity.

Apang also spoke of the obstacles that he came across before the foundation stone for the university was finally laid in his presence, 37 years ago.

He also praised the present vice chancellor Professor Saket Kushwaha who is actively taking a personal interest in all round development of the university.

“The vice chancellor has a magnetic charm which will help the university in the longer run,” he said.

Professor Kushwaha, in his address spoke about the need of inculcating values and zeal while performing one’s duties and finding better solutions to the problem in hand.

“The foundation day celebration is the right time to introspect and find out the right route and method to follow,” the vice chancellor said.

He also extended his gratitude to the Apang for his support and attitude which helped in fulfilling the dreams and aspirations of students of the State.

Professor Amitava Mitra spoke about the importance of celebrating the foundation day while university Registrar Professor Tomo Riba extended the vote of thanks.

Earlier, the celebrations got underway with the inauguration of the newly constructed building of department of physics which was followed by several other programmes.

A marathon was also organized on the day to mark the occasion, in which Bamo Tanang and Sorang Yumi stood first in the men’s and women’s category respectively.

The celebrations on Tuesday would be graced by Governor and RGU’s chief rector B D Mishra who would also give away the vice chancellor’s award for Best Employee of the year.