hike of fellowships in every four years is a mechanism which the Government doesn’t work on, says Prem Taba 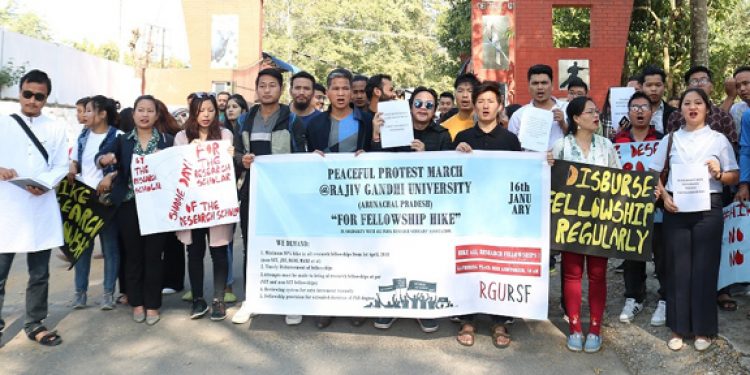 The research scholars of Rajiv Gandhi University in Arunachal Pradesh on Wednesday carried out a peaceful protest march at the university campus here in Itanagar demanding hike in their fellowships.

The march was led by the Rajiv Gandhi University Research Scholars Forum (RGURSF) at the call of the All India Research Scholars’ Association and researchers stepping towards indefinite hunger strike outside the MHRD office, New Delhi on Wednesday for the same reasons.

RGURSF general secretary Kosen Jida while highlighting the demands of the protest said the increase in their scholarships has been halted since April 2018.

“The hike is supposed to happen, automatically, after every four years and even as the HRD Minister’s assurance of fulfilling scholars’ demand last year on December 27, there is no development,” Jida said.

“We have kept mum because we have been doing research and are interested in our research and we want to give back to our society,” she added. With a monthly fellowship of few thousand rupees, the expenditure for laboratory equipment per student costs lakhs and the increase in admission fee and course continuation fee have always been increased whereas there is no hike in fellowship. Further steps will be taken if MHRD does not fulfil the demands,” Jida said.

Talking to media persons here, the IPR secretary of Rajiv Gandhi University Research Scholars Forum, Prem Taba informed that hike of fellowships in every four years is a mechanism which the Government doesn’t work on.

Expressing resentment over the deficient fellowships that the researchers all over India are receiving Taba said that research scholars are the most underpaid labourers in India today. This insufficient amount is directly affecting the quality of research works, he added.

Citing the example of Facebook owner Mark Zuckerberg, who invests high on research and development, he said without encouraged research work any company or nation would deteriorate.

“Prime Minister Narendra Modi at a rally in New York stated that the youths of India would make the country a superpower… If it is to go on like this, youths to come out on streets to ask for their basic rights then the youths will become super frustrated,” Taba said.

If the government can give a 100 percent hike to 543 of its MPs, then why not for research scholars, he questioned. Hitting out the government’s apathy, he said every minister in state and India boasts of improving education and science but the fact is that no one cares

“Over the years, apart from the inflation, there has been a timely and punctual hike in mess fees, semester fees, course fees, synopsis submission fees, and other expenses. The mess fee alone has increased from 6000 to 10000 since then, but our fellowship has remained the same. The hike we ask for is needed for our basic day to day expenditure. We are asking for what we deserve; not begging for money,” Taba further said.

Taba Meth, a research scholar from the Department of Zoology, said, “A nation which has weak research reports will never develop and that if the reforms in the demands are not brought the younger generations would not have a keen interest on Research.”

Meanwhile, over 2000 research scholars from across the country staged an indefinite hunger strike outside the office of MHRD, Shastri Bhawan in central Delhi on Wednesday in support of their long-standing demand of increasing the scholarship amount.

The All India Research Scholars Association (AIRSA) and research fellows from across the country later moved to Jantar Mantar to continue their protest.