Security sources informed that the exchange of fire  took place at Khalakbasti under Namtok Police Station in Chaglang district. 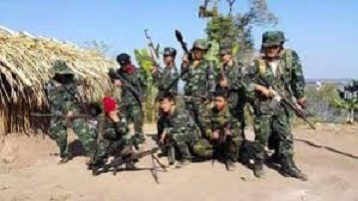 One NSCN-K cadre reportedly killed following a gun battle between the security forces and a group of rebels in Chaglang district of Arunachal Pradesh close to the inter-state boundary with Assam on Friday.

Security sources informed that the exchange of fire  took place at Khalakbasti under Namtok Police Station in Chaglang district.

The security forces also recovered one AK-47 from the spot and apprehended four suspected militants of NSCN-K.

The security forces have been keeping strict vigil in Tirap, Changlang and Longding districts of Arunachal Pradesh that  have border with Myanmar that has camps of Northeast militant groups under the patronage NSCN-K inside thickly forested hostile terrain.

Naga rebels groups are especially active in these three bordering districts of Arunachal Pradesh, which keep security forces on toes.

Besides cross-border movements of insurgents, security forces have to remain on high alert on against criminal activities like abduction and extortion.