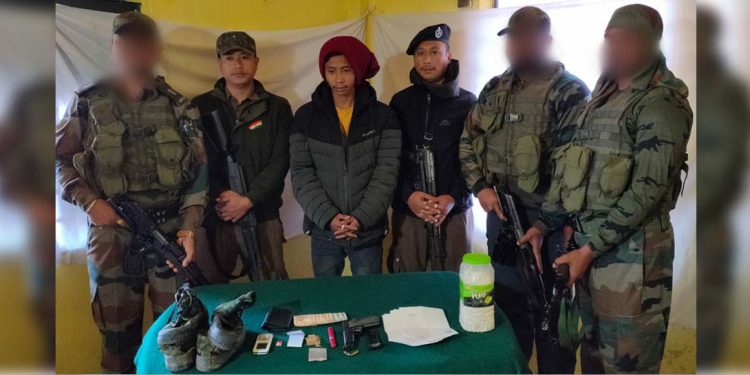 The troops of the Dao Division of Army and police on Wednesday nabbed a hardcore cadre of the National Socialist Council of Nagaland-Unification (NSCN-U) in Tirap district of Arunachal Pradesh.

The militant cadre has been identified as 25-year-old Diwang Letey Lowang of Borduria village in Tirap district of Arunachal Pradesh.

According to sources, after getting intelligence output from ground sources about movement and presence of NSCN(U) cadre in the general area of Hakunjuri, troops of Deomali and Soha Army Camp and police jointly launched an operation to isolate the militant cadre.

The Army and police personnel intensified their operation in the area and denied free hand to the militant to operate with the overground workers of his outfit, sources claimed.

“The joint operation team was successful in its sustained operation and apprehended the hardcore cadre. From the possession of the cadre, a .32 mm pistol, and live ammunition were recovered by the joint team of Army troops under Dao Division and police,” said sources.

The successful operation gave a blow to the insurgent group by reinstalling the confidence of the local populace in security forces in maintaining peace and tranquility in the region.

It may be mentioned that a special investigation team (SIT) of the Arunachal Pradesh police had foiled an abduction, extortion and murder plan of the NSCN(U) in August last year.

The SIT arrested an underground operative of the NSCN(U), identified as Wangchin Wangpan, from Lekhi village near Nirjuli for planning to execute abduction, extortion, and murder in Naharlagun.

SP (SIT) Navdeep S Brar revealed that the police had “received reliable input that the UG group, National Socialist Council of Nagaland (Unification), was planning to execute abduction, extortion, and murder in Naharlagun.”

Keeping in view the sensitivity of the matter, the SIT team, comprising Inspectors N Lali, K Tao, and A Tayeng, led by the SP, raided various locations in Naharlagun and Nirjuli and arrested Wangpan.