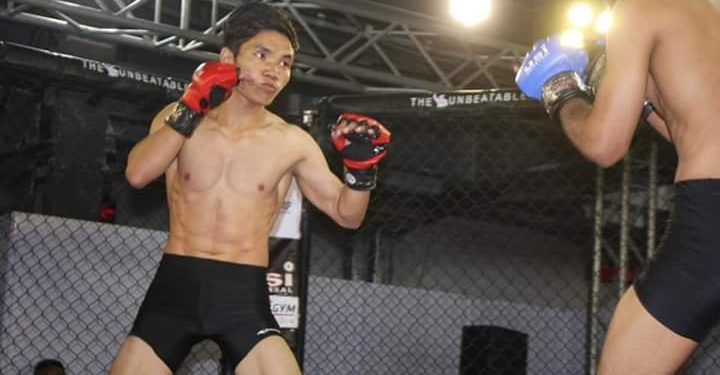 A young Mixed Martial Arts (MMA) fighter of Arunachal Pradesh has been recently selected for training at Attachai Muaythai Gym, Bangkok which is the gateway of One Championship and Ultimate Fighting Championship (UFC).

Taluk Hili, a Black Belt 1st Dan in both Kickboxing and Taekwondo has already participated in national Mixed Martial Arts Open Championship held in Mumbai during last year and has won a bronze medal there after undergoing trainings at Bangalore.

Informing about his struggles and dreams to become a successful martial artist so that he could represent Arunachal Pradesh in particular and India as a whole in the international events like UFC in future, Hili said, he could study only up to Class XII due to poor family background.

“My poor aged parents tried supporting me by selling vegetables and other agricultural products, but due to financial shortages I had to leave further studies after passing Class XII and joined as porter and carried ration for Indian Army to earn money for my Martial Art trainings in Taekwondo and Kickboxing,” added Hili whose passion was toward Martial Arts since his tender age.

Despite several financial shortages, Hili is trying to manage the training at world famous Attachai Muaythai Gym, Bangkok, but he has appealed all his well-wishers and fellow beings to help him financially so that he could complete the training at Bangkok successfully.

Notably, this Attachai Muaythai Gym of Bangkok has produced many famous World Champions in UFC and One Championship including former World Champion in Kick-Boxing, Aling Pinggam from same Shi-Yomi district and Bollywood film star Akshay Kumar.

Both were also former students of this Muaythai Club in the year 1990-91.