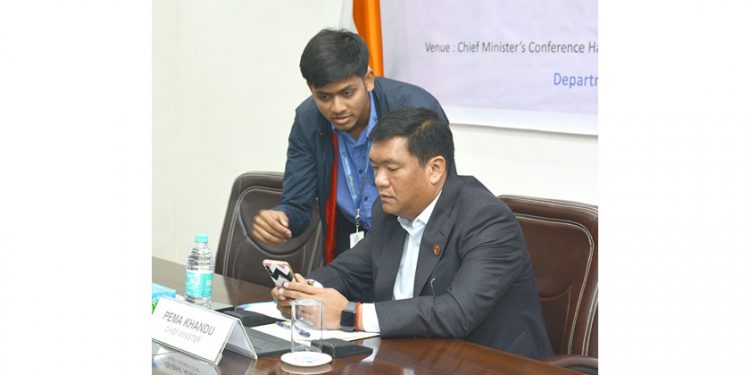 Chief Minister Pema Khandu has reiterated his push for digitalization of offices to ease governance and systematize planning from the grass-root level.

“The Smart Village program is in fact not only a module to empower select villages but also a concrete step towards decentralization of our planning process,” he pointed.

The Data Collection Mobile App would facilitate the Smart Village Movement in mapping available assets, opportunities, challenges and pain points in villages of the state based on which interested partners (MNCs, NGOs, etc) would offer ways and means to empower the villages in select spheres.

Officials can access real-time data and know condition of assets and people in the villages sitting remotely, which would enable them to plan the exact government’s intervention required.

The Arunachal Pradesh government had on June 13 last year signed a memorandum of understanding (MoU) with Smart Village Movement to facilitate technology innovations, research and development, open innovation, technology interventions and curriculum development in select villages. The Movement with its open innovation approach will integrate technology and indigenous rural practices to generate sustainable revenue for constituents, thus increasing overall standard of living and quality of life and simultaneously creating economic, social and environmental value. As per its schedule the program is set to launch this year by end of May.

Complementing the Smart Village Movement, Arunachal Chapter, the department of IT and Communications, State Remote Sensing Application Center, Rural Development and Panchayati Raj department, NIC and technology partner Skymap Global, Khandu said the time schedule must be adhered to so that the benefits of the program reaches people without delay.

Former Consul General, San Francisco, V Ashok, who is a Senior Advisor and Garwood Fellow, Smart Village Program, was present during the launch said Arunachal Pradesh has immense potential for the world to invest and innovate. He sought support and coordination from state government officials to make the Smart Village Movement a success in the state.

“Our ultimate goal is to make Arunachal Pradesh a prosperous and happy place to live in,” he asserted.

Taking a step further to create paperless-offices of the state government, the Chief Minister officially handed over ICT (Information & Communication Technology) equipments, installation of which would enable these departments to go entirely digital and become paperless offices (e-Offices), to five important departments. The departments are Finance, Planning & Investment, Political, Home, General Administration (GA/SA) and Education. The ICT equipments (fully loaded hardware and software) have been procured by the department of IT & Communication through GeM Portal.

Dhawan informed that aim is to take on-board the entire civil secretariat by end of 2019 with plans to overhaul directorates into e-offices by 2020-21 and the district offices by 2021-22.

Keeping in view that often government portals are blamed for lack of updates, nodal officers fully responsible for the upkeep of these sites have been appointed by respective departments.