Arunachal Pradesh forest department has ordered a probe into the alleged hunting of a Sambar deer in Lower Dibang Valley district.

Two persons were caught on camera carrying a hunted Sambar, locally called ‘Sisuk’ on the back of a domesticated elephant near Bomjir bridge, around 12 km from Roing, the headquarters of Lower Dibang valley district.

In the letter the DCF has asked as to why such failure on the part of the range forest officer and field staff of Dambuk Range occurred in checking and controlling such hunting. 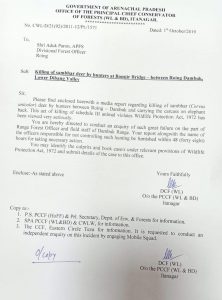 The DCF has directed the official concerned to furnish the action taken report within 48 hours.

He has also directed the DFO Roing to identify the offenders and book them under relevant provisions of Wildlife Protection Act, 1972.

Roing DFO Aduk Paron couldn’t be reached for his comments despite repeated attempts.

Jishnu Barua to be Assam’s next chief secretary