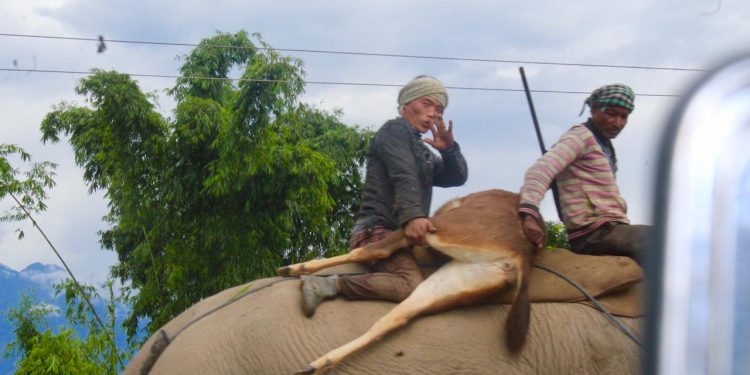 The killings of wildlife in Arunachal Pradesh as pleasure and for commercial purposes besides already socially and traditionally accepted occasional killings of same during festive occasion has grown beyond the limits these days.

These are now being questioned and objected by local people also in order to minimize and discourage wanton killings of wildlife in the State.

In one of such wildlife killing incident on Saturday, two persons were caught on camera carrying a hunted Sambar, locally called ‘Sisuk’ on the back of a domesticated elephant near Bomjir Bridge, some 12 km from Roing, the district headquarter of Lower Dibang valley.

While confirming about the photos shot by him while passing by the highway along Bomjir in between Roing and Dambuk, Buteng Tayeng, secretary of State Affairs, North East Human Rights Organization said the two persons were carrying the hunted Sambar on elephant which might have been killed from nearby forest there.

“The fully grown Sambar with horn was seen carried off toward home by the two persons who rode off the road inside the jungle with the elephant when we started shooting photos and filming the scene,” added Buteng Tayeng.

He feels that such hunting should be avoided by today’s generation in order to save wildlife which most of which species are already on the verge of extinction.

It is pertinent to mention here that, the Adi Baane Kebang, the apex and appellate body of the Adi tribe has also already banned the round the year hunting of wildlife in order to save and protect the rich bio-diversity of the State which are now under serious threat from human greed.

Besides discouraging hunting except occasional festive occasions like ‘Unying Aaran’, ‘Ampi Kiruk’ etc of the Adis, the ABK has already put blanket ban on hunting inside reserved and protected zones like D Ering Wildlife Sanctuary and other Forest Reserves.

However, many people are seen violating the dictate of the ABK also besides undermining the laws of the land like Wildlife Protection Act, 1972 and others which need to be reviewed and implemented hard and fast so that rare species of wildlife could be saved before it’s too late.

The similar protection is also required to protect some forest and herbal species found in the high altitude mountain of Arunachal Pradesh including orchids which have been extracted and collected up to maximum extent leading to depletion of its quantities and species in the State.

The forest and wildlife department of the State need to start a renewed drive on this leaving aside the usual and normal attitude of forgive and forget which only shows the lackadaisical attitude  of the department as such sympathetically approach of the concern department has caused so much to the wildlife population of the State including forest coverage.

The conservation of forest and wildlife in true sense is need of the hour rising above families, friends and politics as interference of politics in the action against the violators of wildlife and forest offenses here in this frontier state are often said to be the major hurdles for forest department besides presence of some of the insincere and undutiful forest officials and staffs within the department.

The incident like hunting and killing of wildlife at the line of such killings of Sambar near near Bomjir at Roing areas need to be restricted and stopped by the state forest officials.

The common public including government servants also need to cooperate in this connection to save wildlife, as several cases of hunting are found practiced and abated by means of supplying/lending arms and cartridges/bullets to the village hunters by many of these government servants and well-to-do families and contractors.