Arunachal: Assurance of school in each village of Bordumsa 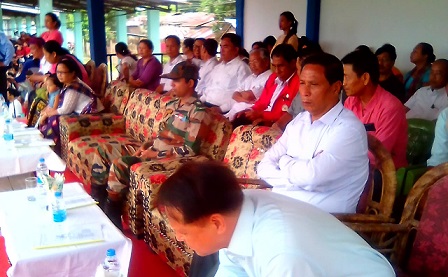 While speaking on the occasion, the ADC assured that each village in the Bordumsa sub-division would have a school and every household of Chakma and Hajong communities in particular would be electrified by
2019.

Taying, who was present at the function as the Chief Guest, in his speech underlined the various aspects of
developmental works being carried out by the State Government.

Taying appealed to the people including the Gaon Burhas and panchayat representatives to help combating the menace of drug abuse in their respective areas.

The collective efforts and contributions of various departments were also admired by Taying.

Similarly, the tricolor at Diyun General Field in Diyun Circle was unfurled by MLA Nikh Kamin in presence of a large gathering including Jacob Tabing, the Extra Assistant Commissioner, officials and heads of departments, public leaders, school teachers, students  and village headmen.

Kamin regretted that people have not been taking the democratically-elected representative into confidence in resolving various issues and deadlocks in the constituency.

“I may not be voted in next polls but at least the people ought not to defile me in social media with all baseless and irrelevant remarks,” said the MLA, adding, “Several proposals for developments have been tabled but those are lying to be approved form upper hierarchy.”

He, however, claimed that despite stiff resistance he initiated various capacity building programme on income and employment generation strategy through NARCOMP and made open to all without discrimination.

In yet another significant development, hundreds of people exhibiting in-house solidarity cutting across caste, community, creed, religion and politics, the tricolor was hoisted at Jyotipur No 2 in Diyun area by former village headman Purna Kumar Chakma at the premises of a newly erected office of Samlung Mossang

A sense of patriotism and commitment to the nation was at its peak in Namsai-based Arunachal University of Studies wherein the national flag was hoisted by Prof VK Kawatra, the Vice Chancellor of the university.