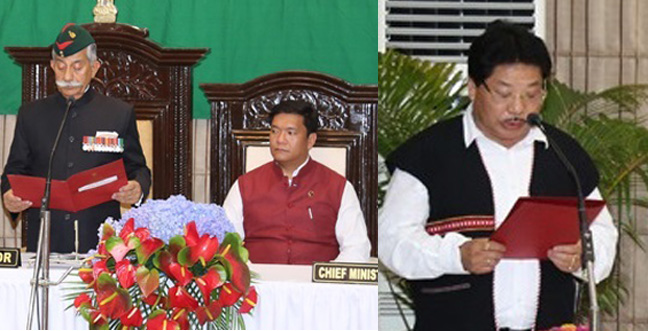 In an official ceremony held at the Raj Bhavan in Itanagar, governor Brig (Retd) B D Mishra administrated the oath of office and secrecy to Khimhun, who will now perform his duties as the pro-tem speaker till the time a new Assembly speaker is elected.

He also will administer the oath to the newly-elected legislators of the State Legislative Assembly when the House is convened on Monday.

Pro-tem speaker is the temporary speaker, who presides over the first meeting after the election.

Pro-tem speaker is a temporary speaker appointed for a limited period of time to conduct the works in Lok Sabha or in state legislatures.

Pro-tem is a Latin phrase which translates to ‘for the time being’ in English.

A pro-tem speaker is chosen with the agreement of the members of the Lok Sabha and Legislative Assembly.

Usually, the senior-most member of the House is selected for the post who then carries on the activities till the permanent speaker is chosen.

The main duty of the pro-tem speaker is to administer the oath of office to new members of the House.

He also enables the House to elect the new speaker and also administers the floor test.

Once the new speaker is elected, the office of the pro-tem speaker ceases to exist.