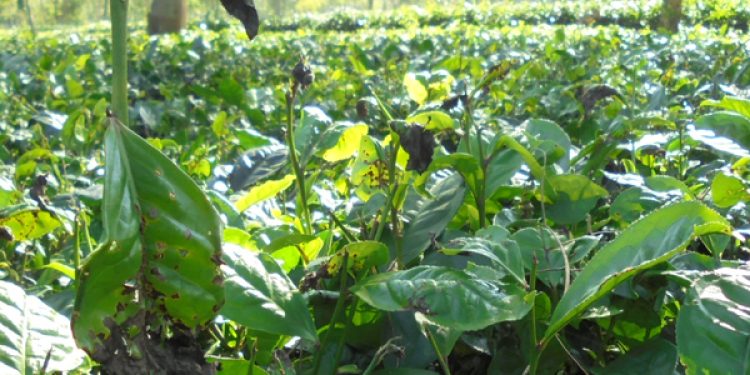 Tea planters in Siang Valley including East Siang, Lower Siang districts of Arunachal Pradesh and bordering Jonai (Assam), who are already bracing for low production owing to lack of rainfall during summer season this year, have now been hit by mosquito bug menace.

A mosquito-like insect Helopeltis (Helopeltis theivora) commonly known as ‘mealy bug’ has created havoc in gardens along Assam-Arunachal boundary areas since October this year. Tea planters fear that if the pest attack is not controlled, it will severely affect the quantity and quality of production of the region.

Helopeltis infestation has been reported from tea gardens at Oyan, Kemi-Jelom, Ruksin, Nari- Seren, Telam and Dekapam areas along boundary area, which incurred huge losses for tea farmers of the region. Unabated bug infestation has compelled many tea farmers to adopt early ‘pruning’ of tea bushes to get rid of the problem.

“We have suffered lost of about 20 percent of the average annual production in tea leaf business this year due to pest infestation. The tender leaves of tea bushes are more prone to attacks from Helopeltis. We sprayed tea board recommended pesticides to control the bug attack but the situation goes unabated”, rued Nyodek Yonggam, a successful tea planter of Oyan village in East Siang district.

Yonggam, who is a former Rajya Sabha Member from Arunachal Pradesh and acting chairman of Siang Basin Tea farmer Association, said that management through pesticides to control the bug infestation has crossed the ‘Economic Threshold Level (ETL)’ so that tea farmers are unable to afford the medicine cost for repeated application.

“We have appealed the government to send expert entomologists to assess the pest infestation and suggest necessary control measures”, Yongam said.

Scientists say although there were chemicals which were used earlier to tackle the bug, theses could not be used at present after implementation of the Plant Protection Code, which barred use of toxic chemicals on the tea plant.

Another tea farmer Rehkar Doye of Seren in Lower Siang district said there has been no respite from the pest despite applying pesticides prescribed by the Tea Board.

“Pluckable tea leaves in large patches of my tea garden were damaged by attack from this particular pest since the last couple of months”, exclaimed Doye.

Helopeltis feed on the tender leaves and young buds of tea plants and it sucks mostly in the morning. The infested parts initially become brown and ultimately turned black and dry. According to scientists, a matured Helopeltis may create 100 sucking per day.

Four tea estates and around 90 small tea gardens are in Siang Valley. After the rubber plantation on the hilly terrain and pain lands of the state boundary area, tea cultivation in the region is making rapid strides during last two decades.