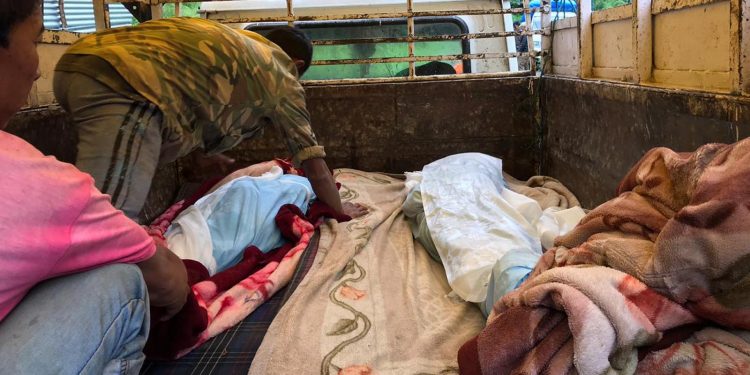 The bodies of the two minor students who died in landslide on Thursday at Lumla. Image credit - Northeast Now

Arunachal Pradesh governor B.D. Mishra and chief minister Pema Khandu have condoled the demise of two minor students who died due to landslide in Tawang district on Thursday.

The incident of landslide took place at Namstering village under Dudunghar circle in Lumla area of Tawang district on Thursday.

Chief minister Khandu has expressed his deep shock and pain over the loss of the two precious lives of young students.

The incident took place at around 3:30 am on Thursday.

A total of 19 girl students were sleeping in the school hostel when the incident took place.

The three other students, who were injured in the incident, are being treated at Lumla and Tawang hospitals.

Conveying his heartfelt condolences to the bereaved family members, Khandu said the state and its people are with the victims during these trying times.

He announced immediate release of ex-gratia of Rs 4 lakh each to next of kin of the deceased and prayed for early recovery of those recuperating in the hospitals.

Assuring all possible support from the state government, Khandu directed the district administration and the disaster management department to continuously monitor the situation.

He directed the chief secretary to personally monitor the situation and shift the people from vulnerable areas to safer places.

Khandu also issued directives to all the deputy commissioners to keep strict vigil and remain alert during the monsoon to avoid human casualties and damages.

He also gave strict instructions to ensure preparedness to tackle the catastrophe.

Sharing the pain and conveying his heartfelt condolences to the bereaved families of two children, the governor has appealed to the people to take precautionary steps to protect themselves from the foreseeable natural calamities.

He asked the administrative heads, school authorities, health department and police personnel to be vigilant and prompt in offering assistance to the people vulnerable from these disaster.

He also asked the department concerned to mobilise necessary help and measures to prevent loss of human lives.

Incessant rain for last couple of days that triggered landslides and flood have left trails of large scale devastation in the entire state.