Arunachal Pradesh Deputy Chief Minister Chowna Mein on Tuesday extended his greetings to the population of the State and the Singpho community in particular on the occasion of Shapawng Yawng Manau Poi.

The 34th edition of Shapawng Yawng Manau Poi, the ethno-cultural festival of the Singphos, began at Namsai district on Monday.

In a tweet on his official Twitter handle, Mein said: “Extend my warm greetings to the people of Arunachal Pradesh, particularly my beloved Singpho brethren on the auspicious occasion of Shapawng Yawng Manou Poi. May almighty Lord Buddha bless all with peace, progress, prosperity, good health and above all happiness.”

The festival is celebrated to commemorate the ancestor of the tribe, Shapawng Yawng.

Notably, Namsai is hosting the festival for the first time.

Earlier on Monday, Singpho chief Duwa Ningroo Jawja Miao, unfurled the ‘Singpho flag’ at the festival ground. Addressing the gathering, the chief urged the younger generation to carry forward the rich cultural heritage of the tribe. 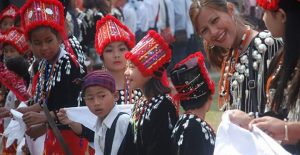 He also urged the youth of the State to keep themselves away from drugs and to strive in the field of education.

Miao is a descendant of Ningroola, the first tea grower of India.

A community dance around the ceremonial pillars, ‘manau shadun’, was also performed on the occasion.

Singpho delegates from various parts of the State and neighbouring Assam, along with foreign delegates are participating in the celebration, which will conclude on Thursday.