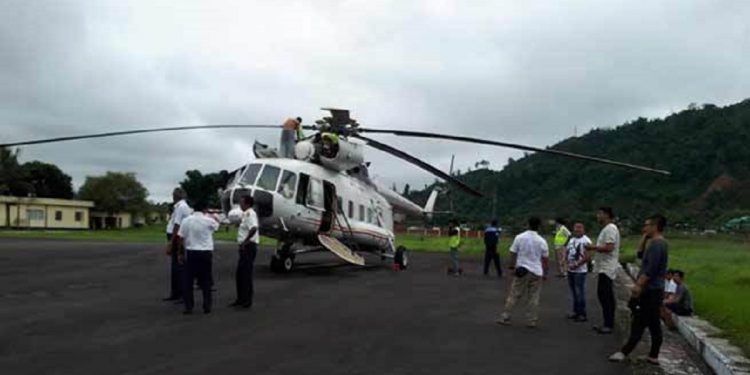 The Civil Aviation department has recently written to the Capital Complex district administration of Arunachal Pradesh seeking complete ban on construction of permanent high-rise buildings in the vicinity of the Naharlagun helipad.

The letter requested for ‘necessary action on priority basis’ to avoid suspension of helicopter operations from Naharlagun helipad by regulatory authorities.

The letter mentioned that the upcoming high-rise building adjacent to the helipad area poses a serious threat to the helicopter operation.

The letter also sought removal of temporary huts from the area adjacent to the boundary wall of the Naharlagun helipad and a prohibitory order for complete ban on construction of structures up to 100 metres of the outer boundary of the helipad.

The letter also mentioned about two grey-coloured mobile towers in the base leg/final approach at approximately 260 – 500 metres from Naharlagun helipad which are also causing ‘operational hazards’.

The DGCA air safety team had earlier observed that the mobile towers nearby the helipad ‘need to be painted alternately orange and white, in a pattern not less than 1.5 metres to 3.00 metres, in rectangle, for proper visibility’.

The letter also advocated for regulation of vehicle parking during Sunday market, saying that parking of vehicles in large numbers blocks the entrance of Gate No. 1 of the helipad, which has been provisioned for emergency exit in the event of any constraint.

It further urged for removal of garbage dumped outside the helipad’s Gate No. 1 as it ‘emanates foul smell causing health hazard and attracting birds which have adverse effect on flight safety’.