Arunachal Assembly to come up with state of art museum

Almost 80 percent of the construction and designing work of the museum, has already been completed 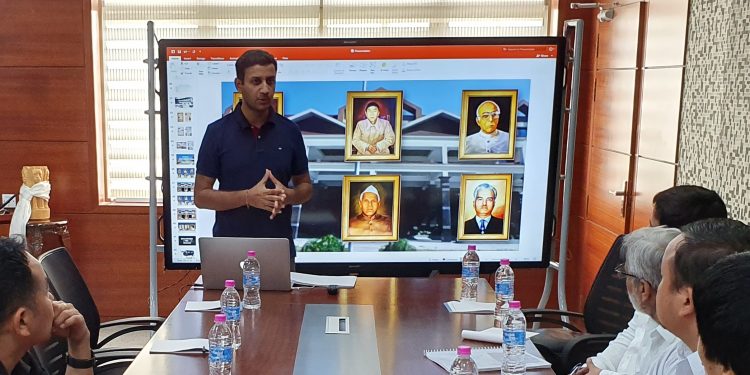 The main motive behind setting up of museum is to preserve the history of Arunachal Pradesh Assembly.

The Arunachal Pradesh State Legislative Assembly is soon coming up with a state of the art museum depicting the origin, growth and functioning of the Assembly as well as the rich cultural heritage of the State.

Almost 80 percent of the construction and designing work has already been completed and the museum is expected to be operational within a-month’s time.

The museum being set up in the Assembly premises will have different sections, such as 3D sculptures, handmade paintings, customized 3D paintings and photographs of the former chief ministers, speakers, deputy speakers and other renowned figures of the State.

It will also be equipped with a 3D Hall which will enable the visitors to see the museum from three dimensions.

Besides this, there is also a selfie zone where the visitors can take selfies and pictures.

Meanwhile, to review the progress of the work, speaker Pasang Dorjee Sona on Friday held a meeting with the officials of the assembly and representatives of executing agency carrying out the construction work at his office chamber.

Addressing the meeting, the Speaker said that the main motive behind setting up of museum is to preserve the history of Arunachal Pradesh Assembly, and called for early completion of the remaining works.

Stating that people usually go to museum to get information, the Speaker urged the officers of assembly to emphasize on facts of artifacts and other objects to be placed in the museum.

“Give utmost care to the facts of objects, artifacts, photographs etc,” the Speaker asserted while asking them to ensure all information and facts are duly verified and authenticated.

He further asked them to take expert guidance and do extensive research to authenticate the facts of each item before placing it in the museum.

Earlier, the whole concept and progress of the museum was explained in detail through a PowerPoint presentation by the representatives of the executing agency.