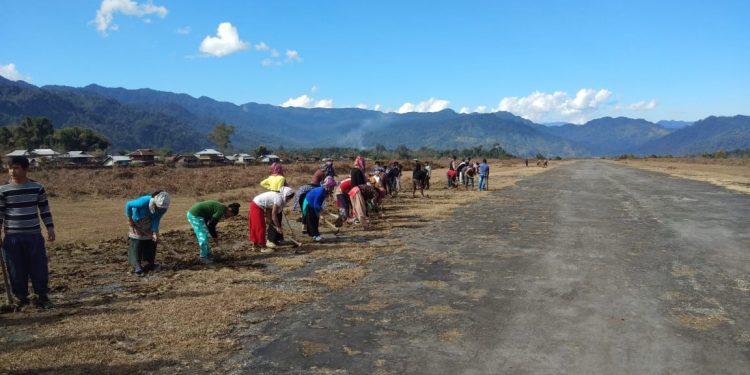 People from 11 villages of the local areas of Vijayanagar volunteered to help air force authorities to undertake this task.

The Advanced Landing Ground (ALG) at Vijay Nagar, the remotest circle of Changlang district in Arunachal Pradesh located along the Indo-China border will be inaugurated on Wednesday.

The Vijay Nagar ALG’s inauguration comes after the launch of seven other ALGs at Pasighat , Mechuka, Walong, Tuting, Ziro, Along and Tawang.

The inauguration of the ALG at Vijay Nagar will allow operations for fixed wing aircraft including the AN 32.

The ALG at Vijay Nagar assumes importance as it borders Myanmar and China.

Vijay Nagar is completely cut off as there is no motorable road to reach remote location.

The Vijay Nagar ALG remained non-operational for fixed wing aircraft since 2016 due to lack of maintenance.

The Centre has been undertaking steps to make ALGs in Arunachal Pradesh operational, at least for defence purposes.

There was a Memorandum of Understanding between the Arunachal Pradesh government and the Ministry of Defence in 2009, which took up the infrastructure development of the Pasighat and other ALGs located at different altitudes in the hilly state at an estimated cost of Rs 1,000 crore.