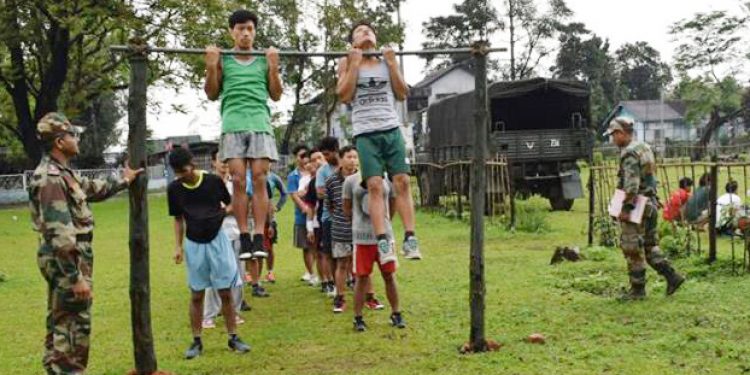 The Army would guide local youths, who are aspiring to join Indian Army and other security forces through recruitment rallies.

He was hopeful that his team would leave no stone turned in imparting pre-recruitment training to the enthusiastic aspirants, who have come from fur flung areas of Siang region.

About 41 youths from different eastern Arunachal districts have been registered for the training availing the opportunity as military officials are giving them technical guidance to make them enable to participate ‘Army Recruitment Rally’ due on November 20 to 26 at Tenga Valley in West Kameng district of Arunachal.

Col Kulin in his address recalled that 26 local youths, who were guided by his army team last year, got services in Indian Army.

“Youths of Arunachal Pradesh are healthy & strong by birth and they have patriotism with a sense of nationalism so that opportunity should be given to them to join in army put into nation’s service,” Col Kulin maintained.

The military official affirmed that Arunachal Governor BD Mishra was committed to convince Union Defence Ministry to adopt policy for relaxation of age and other criterion for Arunachali youths that more local youths can avail job opportunity.

Last year too, the military stationed at Sigar Military Station in association AAUN foundation (NGO) of Pasighat conducted a series of such training to 100 local youths and enabled some of them to join the Indian Army through recruitment rallies conducted at different places of Northeastern States.