APMU to relaunch indefinite strike against oil syndicate at Digboi 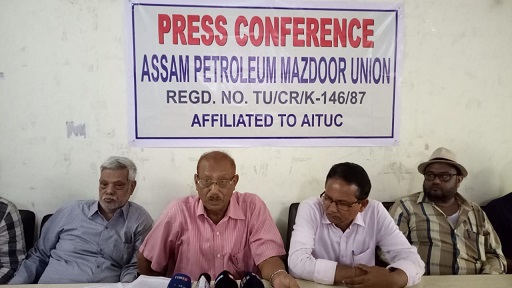 The Assam Petroleum Mazdoor Union (APMU) on Friday announced to relaunch an indefinite agitation against the alleged oil syndicate in Digboi OIL terminal from August 27.

Mahanta alleged the Digboi OIL terminal authority is also involved in oil syndicate that is being carried out for a long time.

Mahanta said, “Loading and unloading of around 150 tankers on daily basis takes place in the terminal. A gang called Goai Association collects Rs 200 to Rs 500 from driver of each tanker. Tinsukia police have not taken any action even after repeated complaint. The Digboi OIL terminal authority also ignores the complaints.”

Lashing out the BJP-led government’s ‘zero tolerance policy’ against corruption, the APMU president alleged that the Digboi OIL terminal authority, Tinsukia police, Dibrugarh MLA, Digboi MLA and Margherita MLA – all are involved in the syndicate.

The APMU president also informed that the workers would go on strike in all 17 loading and unloading points of fuel in Assam from August 27.

“There may be fuel and gas scarcity across the northeastern states. The BJP-led Assam government would be responsible for such possible scarcity,” Mahanta said.

The union also demanded the government to implement the minimum wage policy for the workers of OIL terminal.

APMU general secretary Ramen Das said, “We had called on the Chief Minister earlier. A decision to pay Rs 18,000 as minimum salary to the workers was taken in the meeting. But the government has not implemented the decision yet.”

The union demanded immediate and necessary action from the authority concerned and the state government at the Digboi OIL terminal to stop the ‘oil syndicate’.