Another journalist injured in miscreants’ attack in Jorhat 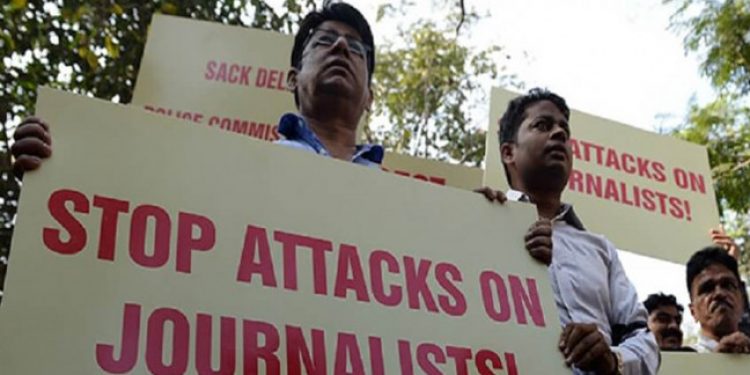 In yet another incident of attack on scribe, a local TV journalist was seriously injured when a group of miscreants attacked him in Jorhat on Saturday night.

Police officials said Rajib Bora, a reporter of a Guwahati-based TV channel, was attacked by a group of five persons on motorbikes near the APDCL office at Mahatma Gandhi Road here at around 10:40 pm.

Later Borawas rushed to the Jorhat Medical College and Hospital (JMCH), and after preliminary medical aid, he was shifted to a private hospital here.

Bora received serious injuries on his head and has been kept in the ICU of the hospital.

Doctors said he was out of danger but needed to be kept in observation for next 48 hours.

Meanwhile, police arrested one of the five accused in the case. The arrested youth has been identified as Jyoti Prasad Das of Dakhin Sarbaibandha here who runs a street food kiosk. Police said efforts were on to nab the other men.

A case (Number 996/2019) has been registered at the Jorhat Police Station in this connection.

A family member of Bora said he was attacked by a group of fast-food vendors who park their kiosks near a shopping mall near the Jorhat Circuit House.

In two separate incidents, two other journalists came under attack in the state recently.

Rajen Deka, a local correspondent of an Assamese daily published from Guwahati, was attacked by BJP activists on Thursday at Tegheritari village in Nalbari district.

In another incident, a Tinsukia based woman journalist was manhandled by a group of four miscreants in a restaurant in Tinsukia.

Upasana Bora Goswami, a journalist with a TV channel, said the miscreants misbehaved with her when she had visited the restaurant on Thursday night.