Alifa: A stark and haunting tale of human survival

No, it is not a glorification of the eternal struggle of man with brute forces of nature for his survival and existence.

Nor it is a commentary on the never-ending quest of man to make both ends meet.

But yes, ‘Alifa’ stirs up the soul for it talks of very existence of man in this world and his vulnerably to exist in this world.

‘Alifa’ is what life throws up to each one of us, at all times in life – the matter of being in this world.

Life’s struggle is both external and internal – the eternal fight for our existence and the inner conflict of survival as a human being.

Debutant director Deep Choudhury who has also written the story and screenplay of the movie knew very well what he wants to narrate, and narrated it the way you and I relate to. 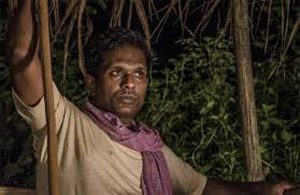 Having complete command over the language of cinema, Deep never ever deviated by emotions in his narrative, thereby evolving  a crisp flow without being stagnant at any point of time.

If on the surface level, ‘Alifa’ details a slice of Guwahati in present times, it delves much deeper into the existentialism of human being on planet Earth.

Ali and his family of four – his wife Fatima and the two children, Alifa and Faisal are the faces of the migrant labourers frantic to find a descent livelihood in Guwahati.

But their struggle is universal, transcending time and space.

The director’s grip over his script and screenplay is ably assisted and beautifully translated on celluloid by cinematographer Nahid Ahmed.

Editor Rabiranja Maitra deserves special mention for his immaculate editing that leaves no space to lean back and ponder.

What stood out as the masterstroke apart from the concluding scene was the imagery of Alifa’s interpretation of her father’s childhood. 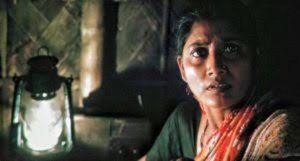 What evolved as a surprise package was the sheen provided by a couple of supporting actors, like Prasun Gayen, Satya Ranjan and Pabitra Rabha who were inimitably and qualitatively superior and the naturalness of the child actors, Pakija Hasmi and Ryan Abdul.

The cameo came by Victor Banerjee in a ‘blink and miss’ scene leaves behind several pertinent questions unanswered – subtly sketched in the movie. 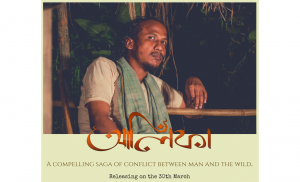 While the solitary song continues to haunt the eardrums, the background score by noted percussionist Vickram Ghosh surely breathes life into the movie.

Deep Choudhury’s bold move to picture the movie in the ‘moimensingya’ dialect, colloquially dubbed as ‘miya’ in Assam paid rich dividends as he could maintain the ethos of his subject and the authenticity of the milieu.

Issues like urban migration, alienation, displacement, marginalization, man-animal conflict, illegal encroachment of forest land, depleting forest cover, illegal nexus of police-forest officials and ‘forced’ settlers remain both as parasitic and paralytic  problems of today’s world, but ‘Alifa’ in no uncertain terms stirred up the soul and is bound to create ripples for all moviegoers for many more days to come.