AGP to continue alliance with BJP despite Himanta’s humiliating comments

If the AGP has a minimum sense of respect, they should walk out of the alliance immediately, says former CM Tarun Gogoi 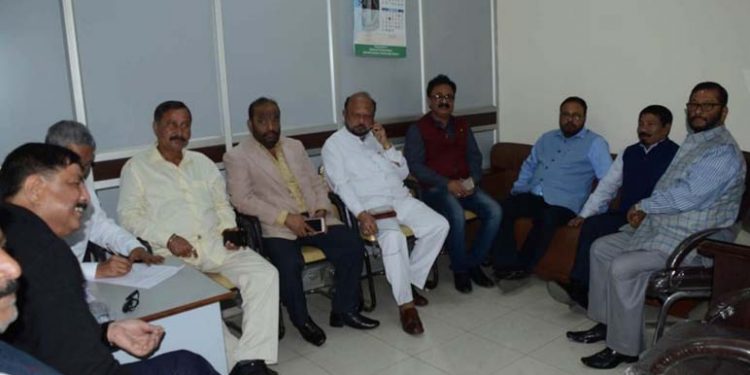 AGP president Atul Bora and other senior leaders in the meeting at Guwahati on Monday. Image credit: UB Photos

A day after Assam Finance Minister Himanta Biswa Sarma slammed  Asom Gana Parishad (AGP) for opposing the Citizenship (Amendment) Bill 2016, the regional party on Monday said it was not ending the alliance but will keep opposing the controversial bill.

Lashing out at AGP, Minister Sarma on Sunday said the AGP has no moral right to oppose the Citizenship Bill 2016.

Sarma hinted that the AGP is free to pull from alliance if it wants to do so.

He said the AGP had accepted the date of March 24, 1971 as the cut-off date through the Assam Accord instead of 1951, thereby taking the burden of more than one crore illegal foreigners from 1951 to March 24, 1971.

Sarma also accused a section of the AGP leaders to having entered with a tacit understanding with the Congress ahead of the Panchayat polls.

“We are not going to walk out of the alliance with the BJP. Rather, we are going to fight against the bill while remaining in power,” AGP president and Agriculture Minister Atul Bora said.

“We have made our stand clear. We are not going to accept the Citizenship Amendment Bill at any cost. We are a regional political party and our politics is restricted to the geographical area of Assam. We are going to follow the directions given by the people of Assam,” Bora said.

The AGP leadership met on Monday and decided to write to BJP President Amit Shah urging him to make clear the saffron party’s stand on the alliance.

Several organisations in Assam including the AGP have been opposing the Citizenship Bill on the ground that it will affect the indigenous people of the state.

The bill seeks to grant citizenship to the victims of religious persecution in Bangladesh, Pakistan and Afghanistan. The Congress and other parties in Assam are daring the AGP to break the alliance with the BJP.

“If the AGP has a minimum sense of respect, they should walk out of the alliance immediately,” former Assam Chief Minister Tarun Gogoi said on Monday.

“How long the AGP leaders can tolerate the insults? BJP leaders are publicly condemning the AGP. BJP leaders dare the AGP to walk off of the alliance if they have the courage. Is this an alliance?” asked Ajmal.