400 women’s groups, rights organizations to launch nationwide campaign ‘If we do not rise’ 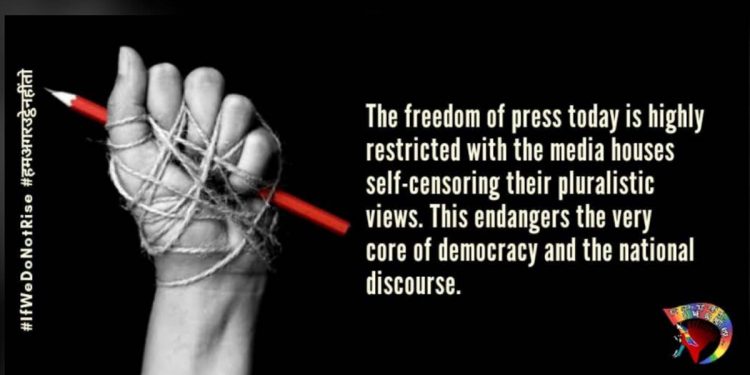 Over 400 women’s groups, human rights organisations and LGBTQIA across India gear up to launch a nationwide campaign ‘If we do not rise’ on September 5.

The campaign will mark the third anniversary of the assassination of journalist-activist Gauri Lankesh.

“The campaign is aimed at uniting voices against targeted attacks on the constitutional rights of the people of India,” said a joint statement issued by the organisers.

As part of the campaign, thousands of individuals and groups will come together across the country to raise their voices on the issues mentioned both on-line and on the ground, it said.

“We begin with India’s democracy and Constitution which are facing an unprecedented crisis. Democratic institutions in the country are wavering,” the statement said.

“The independence of the judiciary and other institutions of oversight has come under a serious cloud. The functioning of the Parliament has been gravely compromised,” it claimed.

The dilution of the Right to Information Act has “hit” at the fundamental democratic right of citizens to question the government and hold it accountable, it added.

The country has witnessed a systematic attempt to spread communal hatred and divide people into religious lines, the organizations alleged in the statement.

The Citizenship Amendment Act (CAA) pushed through Parliament by the government, together with the NRC and NPR, destroys the secular fabric of India’s Constitution by making religion a basis for giving Indian citizenship, it said.

“People all over India rose up in a peaceful and unique, women-led movement to protect the Constitution. Unfortunately, targeted communal violence was unleashed in response to the movement,” the statement said.

Instead of arresting leaders who made hate speeches inciting violence, the women and people who worked for unity, peace and the Constitution are being arrested and incarcerated, it said.

In August 2019, the Government assaulted India’s Constitution and federalism by abrogating Article 370 and destroying the statehood of Jammu & Kashmir. The internet service has not been fully restored even one year on.

Freedom of expression is guaranteed by the Constitution.  Voices of dissent have been systematically silenced and labelled anti-national. Activists, journalists and academics engaged in various movements are languishing in jails, without access to the legal provision of bail. The Unlawful Activities Prevention Act (2019) has been amended and used to implicate dissenters and arrest them.

There has been a steady deterioration in the rule of law with alarming cases of police excesses, including custodial deaths. Regressive laws like the Transgender Persons (Protection of Rights) Act have adversely impacted the rights of Transgender persons. There are very few provisions in place to protect the safety and rights of the entire LGBTQIA community.

“One of the key concerns in recent times has been the number of projects that have been cleared by the MoEF which if not stopped will be detrimental to the northeast region, and will be a big loss at a national as well at a global level,” it said.

“Above all this is the EIA draft, if passed the way it is, will leave little hope for environment and wildlife as well as community well being across the Northeastern Region as well as India,” the statement said.