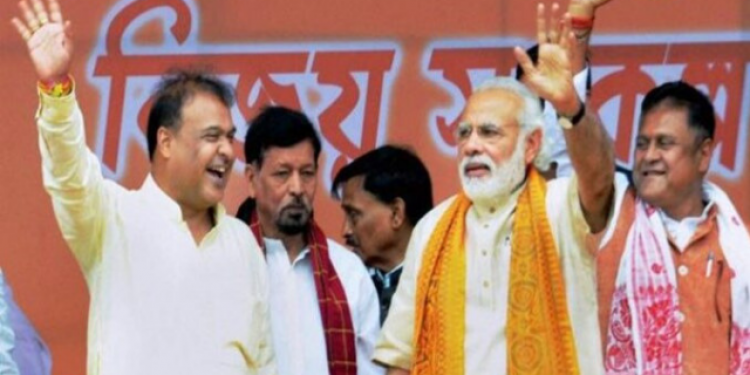 Riding on NDA’s landslide victory in the Northeast, the aspiration for more ministerial berths from the region has started to grow.

Prime Minister Narendra Modi is set to hold a cabinet meeting on Friday evening at the South Block to dissolve the 16th Lok Sabha. The crucial meeting is also likely to take crucial decisions on formation of the new government.

Though there has been no official announcement on the day of swearing-in, Modi is likely to form the next government on May 30.

A number of the newly-elected BJP MPs from the northeast are hopeful to find a ministerial berth in the new government. The BJP has won 14seats, while NDA partners registered victory in three more seats in the Northeast.

While there were only eight BJP MPs from Northeast in the 16th Lok Sabha, there were two junior ministers in the government– Kiren Rijiju (Home Affairs) and Rajen Gohain (Railways).

This time, the BJP and NDA partners have managed to win 17 of the 25 Lok Sabha seats in the Northeast. Naturally, the aspiration for more ministerial berths has started to grow.

Because of an excellent performance as MoS (Home), BJP leaders in the northeast are hopeful that Kiren Rijiju returning to Modi’s team is almost certain.

While Rajen Gohain did not contest the Lok Sabha election from Nagaon, there is every possibility that there will be a fresh face from Assam in Modi’s new government.

According to some BJP leaders, Modi’s new government is likely to have a lot of new faces. Though the leaders are still unable to predict anything on the formation of the new government, three MPs from northeast are likely to be inducted as ministers.

As Modi has the habit of springing surprises, a section of the leaders in the saffron party are hopeful that Assam health minister Himanta Biswa Sarma may also find a cabinet berth in the new government.

Known for his extraordinary organizational skills, Himanta Biswa Sarma would be a great asset to the new government in New Delhi. He also deserves an award for his excellent role in formation of NDA-led governments in Manipur, Tripura and Meghalaya.

Moreover, Sarma’s role in BJP winning 18 seats in the Lok Sabha elections in West Bengal also cannot be ruled out. He was camping in Mamata’s bastion for over two weeks to fine-tune BJP’s election strategy.

Though Sarma did not contest the Lok Sabha election in Assam, his berth in Modi’s government cannot be ruled out.

The highly efficient minister may immediately find a place in the Upper House, and there would be no need to vacate any Lok Sabha seat. The election for the two vacant Rajya Sabha seats in Assam is scheduled on June 7.

In addition to Rijiju and Sarma, the third minister from the northeast may be from either Manipur or Tripura. A section of NPP leaders are also optimistic that Agatha K Sangma, daughter of former Lok Sabha Speaker Purno Agitok Sangma, is also in the list of probable ministers.

While the new government will aim to function with a renewed vigor, some of the senior BJP ministers like Arun Jaitley and Sushma Swaraj are not likely to join the government because of poor health conditions.

Moreover, some ministers – Hardeep Puri, KJ Alphons and Manoj Sinha have lost in the elections.

With JD (U) had a smooth sailing in Bihar, MPs from the party could get key portfolios. Ram Vilas Paswan’s LJP and Uddhav Thackeray’s Shiv Sena too, will also get important portfolios.

There are also reports that BJP president Amit Shah, who has the experience of holding the portfolio of MoS Home in Gujarat, may replace Rajnath Singh as the new home minister of India.

While Smriti Irani is expected to get a bigger job in new Modi Cabinet after her victory in Amethi, Rajnath Singh may be offered the Defence portfolio. Defence minister Nirmala Sitharaman may replace Sushma Swaraj.

Senior ministers Ravi Shankar Prasad and Nitin Gadkari are likely to be assigned with important responsibilities in the new government. Mukhtar Abbas Naqvi, who is the prominent Muslim face in BJP, may get a cabinet rank this time.

Other ministers like J P Nadda, Dharmendra Pradhan and Prakash Javadekar are also likely to be given important portfolios, the sources said.