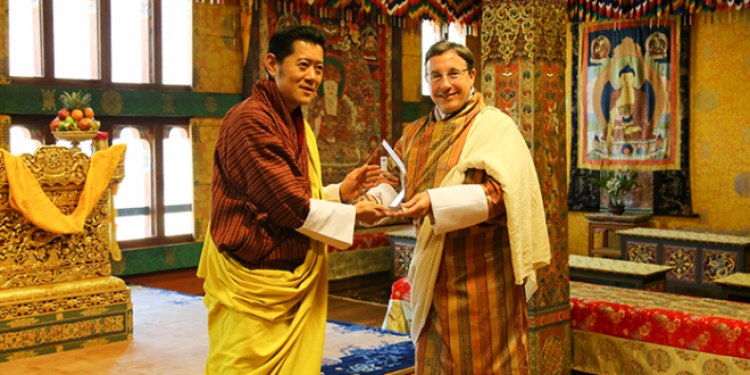 The United Nations Development Programme (UNDP) on Wednesday bestowed a Special Award of Recognition on His Majesty King Jigme Khesar Namgyel Wangchuk of Bhutan in recognition of his excellent leadership which has helped in advancing human development and the happiness and well-being of the citizens of the Buddhist kingdom on the Himalayas.

A report published in Kuensel stated that the award was presented by the UNDP Administrator and United Nations Under-Secretary General, Achim Steiner, who is in the country as co-chair of the 14th Round Table meeting.

The report further stated that the King was awarded for three major human development achievements in Bhutan – for championing Gross National Happiness (GNH) as a holistic development paradigm, his leadership in environment conservation and climate action resulting in Bhutan being the only carbon-free country in the world and his strong guidance which ensured a smooth transition of the system of governance and strong democratic foundations to be established in Bhutan.

The National Human Development Report (HDR) of 10 years of democracy released on Wednesday is a wonderful proof the king’s effort as it has shown how development is no longer an alien concept in Bhutan.

Praising the King, he further added that the country’s success bears testimony to the fact that the King and the Royal Government has taken huge initiatives to keep the wheels of development moving in Bhutan.