In an interview of the rebel chief published in the Week magazine (Dec 2 issue), Barua says of China: "their friendship is unparalleled." 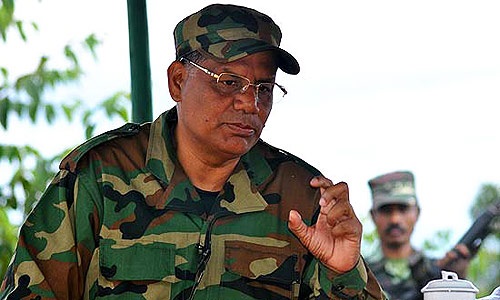 In an interview of the rebel chief published in the Week magazine (Dec 2 issue), Barua says of China: “their friendship is unparalleled”.

But he is quick to warn that “We need to understand China’s compulsions..so we cannot expect them to do everything we ask for. They can do certain things, but they cannot do everything for us.”

Barua is further quoted as saying : “We understand that situation, so we are reaching out to other nations.”

Which other nations is he talking about remains unspecified.

The magazine, which carries the story on its cover, does not make it clear whether Barua has given an interview in person or over telephone or just emailed his answers — and that too, how long ago.

This issue has hit the stands when Indian National Security Advisor Ajit Doval is in China for border talks with its special representative and State Councillor Wang Yi.

India has already asked China formally to extradite Paresh Barua to stand trial in India, but China has denied his presence in their territory.

It is not clear whether Doval has raised the issue again during his talks with Wang Yi at Chengdu (23-24 Nov).

In the interview, Paresh Barua has claimed he played a role in getting Khango Konyak thrown out of NSCN(K).

“I suggested they change their leadership and bring in young faces .. my proposal was accepted .. you need idealistic and young leaders who would connect with the people of India,” Barua is quoted as saying.

Why would NSCN(K) need to connect to the ‘people of India’ is not clearly explained.

But Barua stressed the need for a young leadership in his own organization, ULFA(I).

If it wants to survive, ULFA (I) would have to bring in a new leadership and that is exactly what we are doing,” Baruah is quoted as saying.

But he does not give out the proposed changes in leadership in his organization. He claims “many new faces have joined us in recent months.”

Barua says there is hardly a chance for a political solution in Assam because India will not address the issue of Assam’s sovereignty.

He berates India and asks its people ‘to go to China ‘ to see how it has become the second richest country in the world.

“Go to North Korea. They are even better than us,” Barua says. “In India, you will see prohibition on beef-eating and splurging on festivals.”

“I do believe the grievance of the people of Assam is genuine but what is the point (of revising the register) now ? The NRC is to specifically create divisions between Hindus and Muslims,” Barua is quoted as saying.

The rebel chief stresses on diplomacy as much as on armed struggle.

“These days I am meeting foreign delegations every month,” he is quoted as saying.

Presumably the interview was taken before some media reports suggested Barua may have died in a road accident.

Because there is no reference to that– no question or reaction — during the interview spread over three pages.