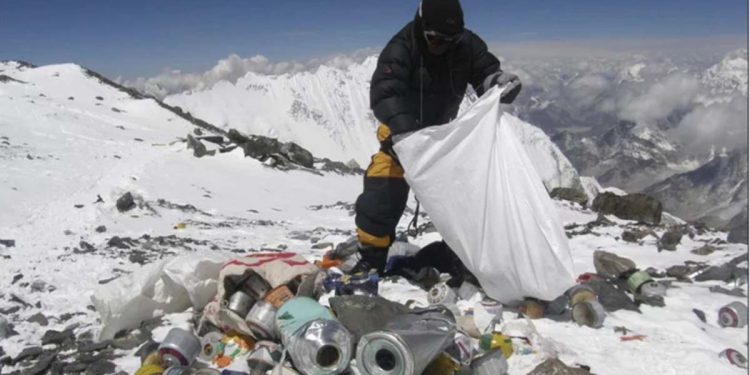 The Nepalese government’s plan to clean-up Mt Everest and five other Himalayan peaks has received a roadblock with top mountaineers of the country slamming the initiative.

The Nepalese government planned to clear 35,000kg of rubbish from Mt Everest and five other Himalayan peaks.

A media report quoted the government as saying that the army will be engaged in the cleaning task.

But the leading mountaineers of Nepal have raised voice against the government’s plan and demand for engagement of the Sherpas in the task.

Kami Rita Sherpa, who has scaled Mt Everest for a record 24 times, said the army personnel have no skills to reach the highest points of the Himalayan peaks.

The report quoted Kami Rita Sherpa as saying: “They (army) collected garbage from lower altitudes,” adding, “They should mobilise Sherpas to clean up garbage from higher elevations.”

The top mountaineer said: “Only Sherpa guides and porters can do that. They should be given proper compensation to clean up the mountains.”

Purba Tashi Sherpa, who has scaled the world’s highest peak 21 times also said, “Climbing Sherpas are the right people to clean up the peaks,” adding, “The government should keep that in mind.”

Apart from Everest, five other Himalayan peaks including Lhotse, Pumori, Amadablam, Makalu and Dhaulagiri attract a large number of mountaineers from around the world each year.

These mountaineers often abandon oxygen and cooking gas cylinders, climbing gear and other rubbish like food wrappers, cans, and bottles in their attempts to reach the summits.

However, Nepali Army spokesman Bigyan Dev Pandey said the army team would be able to reach the upper areas during the clean-up drive this year.

The Mt Everest clean-up drive will end on June 5.

The report quoted Pandey as saying: “We are learning from our mistakes and working hard to clean up the mountains, including the higher elevations.”