The Tatmadaw stated that it has reinstated all Supreme Court and High Court judges in the Country’s States.

Hours after the Tatmadaw (Myanmar military) declared a state of emergency in the Country, it announced names of few of the officials and members of the newly formed Government in the Country.

The military coup in Myanmar allowed the Tatmadaw to replace the previous national League for Democracy-led Government.

The Tatmadaw stated that it has reinstated all Supreme Court and High Court judges in the Country’s States.

It also reportedly reinstated the members of the Anti-Corruption Commission of Myanmar and the Myanmar Human Rights Commission.

New members of the new Government:

5) U Win Shein – Minister for Planning, Finance and Industry

8) U Chit Hlaing – Minister for Information

10) U Myint Kyaing – Minister for Labour, Immigration and Population

12) U Than Swe – Chair of Union Civil Service Board 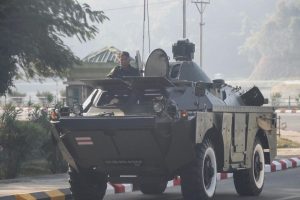 Notably, Aung San Suu Kyi and other leaders of her National League for Democracy (NLD) were detained by the Myanmar military during a raid in the wee hours on Monday.

The Myanmar military soon after detaining NLD leaders, took over control of the country.

The coup comes following tensions between the civilian Government and the military after the general elections in the Country in November last year.

The democratic reforms in Myanmar began in 2011.

Earlier, the country was ruled by the military.

The Myanmar military on Monday had announced that it handed power to Commander-in-Chief Min Aung Hlaing.

Soldiers are reportedly seen on the streets of the capital – Naypyitaw and the main city – Yangon.

Meanwhile, India has expressed deep concern over the military coup in Myanmar and the detention of de facto leader Aung San Suu Kyi.

India said the rule of law and democratic process must be upheld.