Over 150 people across Myanmar lost their lives as the Country’s military resorted to “shoot to kill” protestors on “bloody Saturday”.

New artwork showing how one artist views world leaders and their handling of the Myanmar military coup.

But, the best leaders of super-powers can do is ‘condemn’ and put ‘sanctions’.

Thousands of people in Myanmar have been taking on to the streets, since the day coup broke out, bravely facing the “unprofessional, brutal and power hungry” military of the Country.

Saturday, was the ‘bloodiest’ day since the military coup took place on February 1.

Over 150 people across Myanmar lost their lives as the Country’s military resorted to “shoot to kill” protestors on “bloody Saturday”.

This bloodshed by the Myanmar military comes on the Country’s Armed Forces Day.

And, at a time when the personnel of Myanmar military were on a “killing spree” on the streets across the Country, what did leaders of the world do?

They joined the military leaders of Myanmar, led by its dictator General Min Aung Hlaing during the ‘Armed Forces Day’ celebrations in the Capital city of Naypyitaw.

This shows Russia’s complicit attitude towards the loss of lives and “Crimes against Humanity” committed by Myanmar military.

Russia was in fact represented by its deputy defence minister in the military parade. 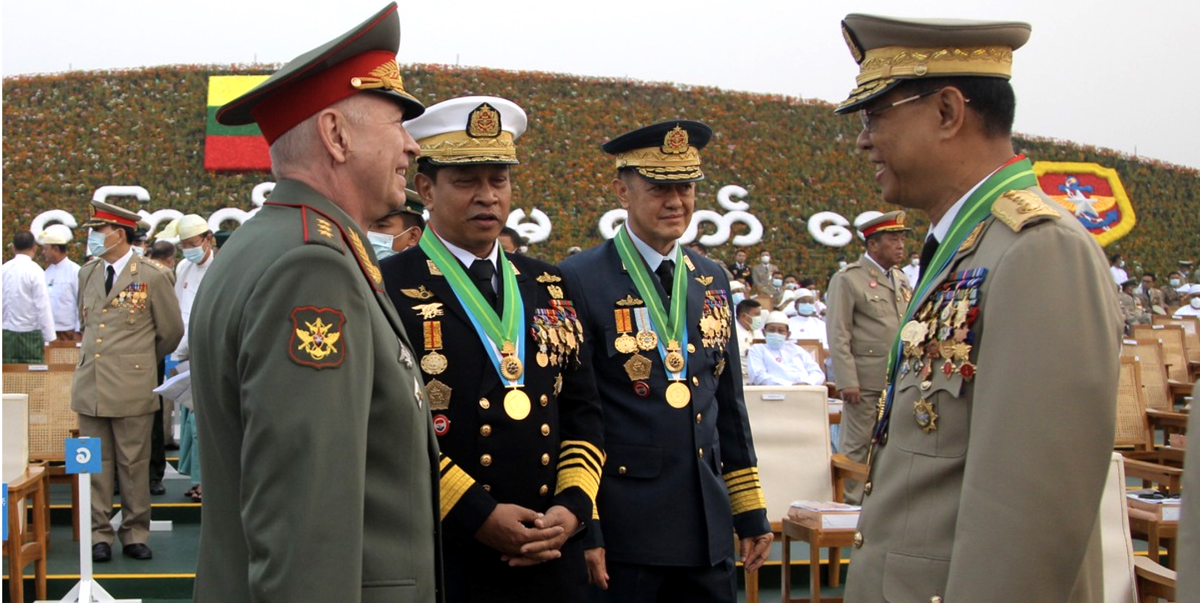 India too chose to send a representative to attend the Myanmar Armed Forces Day military parade in Naypyitaw on Saturday.

A verified Twitter account of the Myanmar pro-democracy movement asked why India, “one of the greatest democracies in the world”, sent a representative to “shake hands with the generals whose hands are soaked with our blood”.

Indian embassy in Myanmar sent their military attaché to the military junta’s ‘armed forces day’ ceremony. India is one of the greatest democracies in the world. Why do you shake hands with the generals whose hands are soaked with our blood? @DrSJaishankar @MEAIndia @PMOIndia

Apart from Russia and India the other countries that chose to attend the military parade were – China, Pakistan, Bangladesh, Vietnam, Laos and Thailand, none of which can be termed as democratic as per Indian standards.

Spokesperson for an anti-junta group of elected NLD lawmakers, known as the – Committee Representing Pyidaungsu Hluttaw’ (CRPH), Sasa said: “It is impossible for us to express the pain that we feel when we saw those foreign diplomats joining hands with those celebrations of military generals. All those weapons they displayed today is to only kill the people of Myanmar.”

However, on Sunday defense ministers of 12 countries including the United States, Britain, Japan and Australia came together and jointly condemned the Myanmar military’s use of lethal force against civilians.

“A professional military follows international standards for conduct and is responsible for protecting — not harming — the people it serves,” the rare joint statement said.

“We urge the Myanmar Armed Forces to cease violence and work to restore respect and credibility with the people of Myanmar that it has lost through its actions.”