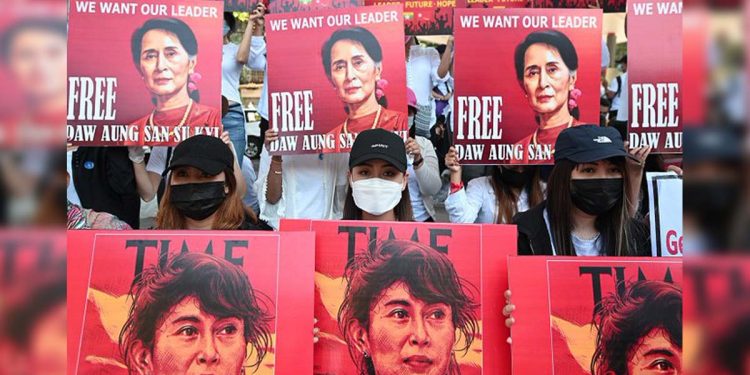 The Myanmar diaspora has gone global amid protests against the military coup with demonstrations in a number of countries like India, Japan, Thailand and Taiwan.

According to a media report, the Myanmar diaspora continues to protest in Tokyo outside the Japan foreign ministry office asking the Japanese government to condemn the military action in Myanmar.

Japan, which has a close relationship with Myanmar, has been providing development aid and is setting up industrial projects.

Japan, which also talked to the Arakan Army rebels to bring stability in the country, has been involved in promoting the democratic process in Myanmar.

The anti-coup protestors have also raised voice in Taiwan.

It has been reported that a few hundred people staged protest in Taipei streets in solidarity with Aung San Suu Kyi, who remained State Counsellor of Myanmar before she was detained by the military.

Many of the Myanmarese in Taiwan earlier escaped military repression.

The Myanmar diaspora is also protesting in neighbouring countries like India, Thailand and Indonesia against the military coup.

According to the report, pro-democracy protestors participate in the demonstration wearing dress in red – the colour of Suu Kyi’s National League for Democracy (NLD) party and carrying her photographs.